Whether it is to prevent obesity, or treatment of obesity, the degree of difficulty, it is more difficult for children than adults. For adults, beauty, fitness reasons, can reluctantly lose weight, young children may not have this awareness. Is a certain ability to distinguish, can control their exuberant appetite, but their bodies are in the growth and development period, it must be sufficiently absorb nutrients needed for growth. 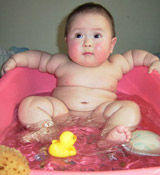 Parental support programmes in areas with the greatest needs can have a positive effect on the consumption of unhealthy food and drink and on weight increases in obese children. This according to a randomised study conducted by Karolinska Institutet and the Stockholm County Council, Sweden, published in the International Journal of Behavioural Nutrition and Physical Activity.

Even though school-based programmes promoting healthy eating and physical activity and preventing overweight have had a demonstrable effect, more knowledge is needed on how to best involve the children’s parents. The En frisk skolstart (lit: A healthy school start) programme was therefore launched to support parents in their attempts to promote good dietary habits and physical activity in their preschool children. The present study was carried out in the Stockholm region in areas of low socioeconomic status and where the incidence of overweight and obesity is the highest in the county. The researchers compared 16 preschool classes that were participating in the programme with 15 preschool classes that received no intervention.

The researchers found that the intervention programme gave rise to a significant reduction in the consumption of unhealthy food and drink, such as snacks, ice cream, biscuits, sweets, soft drinks, flavoured milk and fruit juice. Children with obesity at the start of the programme also had an observable reduction in BMI.

“The results are promising, and demonstrate that school initiatives and parental support can promote healthy eating behaviours in six-year-olds with the greatest need,” says project leader Gisela Nyberg at Karolinska Institutet’s Department of Public Health Sciences and the Stockholm County Council’s Centre for Epidemiology and Community Medicine. “However, the programme needs enhancing if it is to have a stronger and more lasting impact.”

During the six months of the programme, the parents in the intervention group received health information to read and two motivational interviews. In the school, ten classroom activities were performed with the children, who received assignments to complete at home with their parents. Data on height, weight, diet, physical activity were taken for all of the children at the start of the programme, shortly afterwards and five months after its conclusion. At this fifth-month follow-up, the positive effects of the lower consumption of unhealthy food remained amongst the boys. The programme had no effect on physical activity, but the children’s level of activity was high already from the start.

“The project makes an important contribution to the further development of evidence-based programmes for promoting healthy eating and physical activity and preventing overweight and obesity in children,” says Dr Nyberg. “In the long run, this can help to improve public health and reduce health inequality.”