A group of experts have advised that people working in office environments stand for at least 2 hours a day during working hours, as part of a number of recommendations to protect those engaged with typically sedentary forms of work. 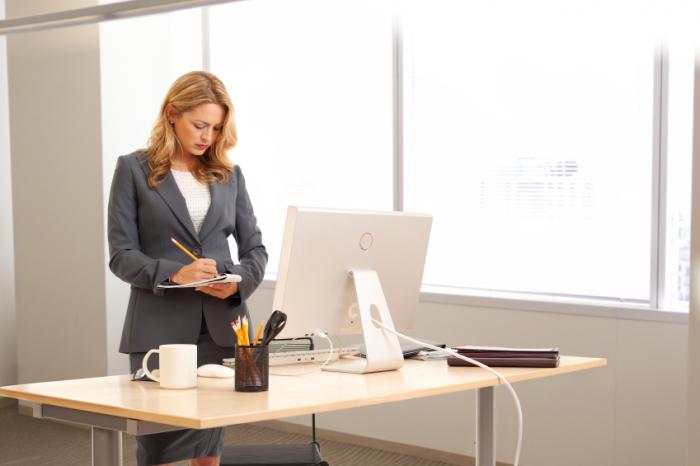 Breaking up long periods of sitting with activity is considered by most experts to be advantageous to the health of workers.

Workers whose jobs are predominantly desk-based should eventually progress to a total of 4 hours standing, advises the panel.

The recommendation comes as part of a set of guidelines, published in the British Journal of Sports Medicine, with the aim to provide guidance to employers and office workers to counteract the health risks that come with long periods of seated office work.

“For those working in offices, 65-75% of their working hours are spent sitting, of which more than 50% of this is accumulated in prolonged periods of sustained sitting,” write the authors. “The evidence is clearly emerging that a first ‘behavioral’ step could be simply to get people standing and moving more frequently as part of their working day.”

An increasing number of studies associate sedentary living – including time spent at work – with an increased risk of several serious illnesses and causes of death, including cardiovascular disease, diabetes and some forms of cancer.

Although much of the evidence the panel used to inform its recommendations comes from observational and retrospective studies, they state that “the level of consistent evidence accumulated to date, and the public health context of rising chronic diseases, suggest initial guidelines are justified.”

The key recommendations of the guidelines for office workers during working hours are:

Guidelines ‘pose no significant physical or cognitive challenges’ for workers

There is a growing interest in changing working environments so that they are no longer wholly sedentary. Many companies now provide office furniture with sit-stand attachments for desks or fully adjustable sit-stand desktops, allowing office employees to work without having to be seated.

While a number of companies have already begun investing in changes to enable their employees to work in a more active environment, many have not. The panel state those that have yet to do so should begin to evaluate how best they can implement these recommendations.

Potential measures that can be taken include making provisions for breaks that involve standing and movement and investing in desks and office designs that allow employees to work easily while standing up.

The panel warns, however, that simply changing a working environment may not be enough to alter behaviors in the long term. “Strategies and programs for implementing change will need careful organizational and behavioral support and public education to prevent current interests in active office environments from simply being a passing fad,” they write.

“On the basis that there are a large number of occupations which involve people standing and moving for considerably more than 4 [hours a day] (e.g., hospital staff, teachers, factory workers, retail and catering staff), it is expected that for office-based workers, in general, this should not pose too many significant physical or cognitive challenges,” the authors conclude.

The panel of international experts was commissioned by Public Health England and a British community interest company, Active Working CIC.