A team of engineers from Stanford University in California has created a plastic material that recognizes pressure, delivering a signal straight to a living brain cell. They say their work serves as a step toward creating artificial limbs with the sense of touch. 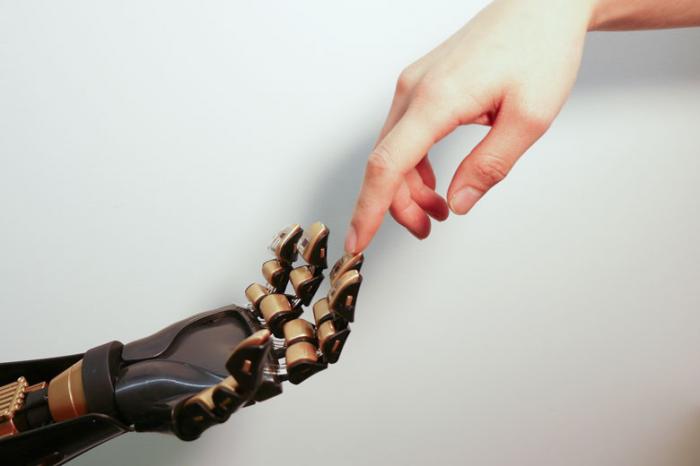 The creation of the new “artificial skin” represents a step toward prosthetic limbs that can sense touch.
Image credit: Bao Lab/Stanford University

The engineers, led by Prof. Zhenan Bao, publish their work in the journal Science.

Prof. Bao has been working for a decade to develop a material that can imitate the skin’s ability to flex and heal, as well as send signals to the brain that represent touch, temperature and pain. Her end goal is to create a flexible fabric laced with sensors that cover an artificial limb and copy some of the skin’s senses.

The team’s technique consists of a plastic setup with two layers. The top layer has a sensing mechanism, and the bottom layer works like a circuit, sending electrical signals and translating them into messages for nerve cells.

In their new work, the top layer features a sensor that recognizes pressure like human skin does, distinguishing pressure differences between a lighter finger tap to a firm handshake.

According to the team, human skin relies on receptors that send digital signals for “tactile sensing,” in which the varying pressures are converted to a series of voltage pulses.

“This is the first time a flexible, skin-like material has been able to detect pressure and also transmit a signal to a component of the nervous system,” says Prof. Bao.

About 5 years ago, the team first described how plastics and rubbers can be used as pressure sensors, by measuring the flexibility of their molecular structures. They were able to increase this pressure sensitivity by embedding a waffle pattern into the plastic, further condensing the plastic’s molecular springs.

To employ this pressure-sensing ability electronically, the researchers spread billions of carbon nanotubes through the plastic. They explain that compressing the plastic squashes the nanotubes even closer together, making it possible for them to conduct electricity.

By doing this, the plastic sensor was able to imitate human skin and the way it transmits pressure information to the brain in the form of short electricity pulses – sort of like Morse code.

The short pulses are then sent to a sensing mechanism. By removing pressure, the pulse flow relaxes – suggesting light touch – while removing all pressure makes the pulses stop. Prof. Bao and her team then hooked the sensing mechanism to the second layer of their artificial skin, which can carry electricity pulses to nerve cells.

Their final task was to prove that the electrical signal can be recognized by a biological neuron. They did so by using a technique developed by a Stanford professor of bioengineering – Karl Deisseroth – who pioneered optogenetics, a field combining genetics and optics.

To complete their task, the researchers made a line of neurons that replicate a part of the human nervous system by translating electronic pressure signals from their artificial skin into light pulses. This, in turn, activated the neurons and proved the skin could create a sensory output that is able to communicate with nerve cells.

Though this technique with optogenetics is experimental, the researchers say other stimulating methods will likely be used in real artificial limbs. They would like to eventually create different sensors that could give limbs the ability to tell the difference between corduroy and silk, for example.

“We have a lot of work to take this from experimental to practical applications,” says Prof. Bao. “But after spending many years in this work, I now see a clear path where we can take our artificial skin.”

The authors conclude their paper by writing:

“This work represents a step toward the design and use of large-area organic electronic skins with neural-integrated touch feedback for replacement limbs.”

Last year, Medical News Today reported on the successful development of a prosthetic arm controlled by the brain.