A team of scientists has developed a tiny, cheap sensor that senses meat odor and can detect if it contains certain gases that would indicate it is unsafe to eat. 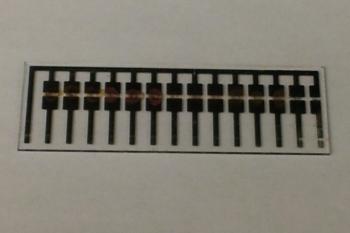 The sensor could be incorporated into smart packaging that tells the consumer whether the product is safe to eat.
Image credit: Sophie Liu/MIT

The team – from Massachusetts Institute of Technology (MIT) – suggests the device could be incorporated into “smart packaging” to give more accurate safety information than displaying an expiration date.

They describe how they developed and tested the device – which consists of chemically modified carbon nanotubes – in a paper published in the international edition of the journal Angewandte Chemie.

Currently there is no easy, inexpensive way of telling if meat in the grocery store or the refrigerator at home is safe to eat.

In the US, perishables like meat, seafood and poultry carry “sell-by” dates. However, these are not guarantees of food safety but guides to the retailer on how long they can display the food items before their quality deteriorates.

“Use-by” labels usually appear on shelf-stable foods, and they are also to do with best flavor or quality. They do not indicate a purchase or safety date.

The US Department of Agriculture (USDA) point out that even “if the date expires during home storage, a product should be safe, wholesome and of good quality if handled properly.”

Meat sensor could cut down on food waste

However, many consumers use the dates on packaging as a guide to the safety of the food they contain. Timothy Swager, a professor of chemistry at MIT and senior author of the paper, says their sensor could cut down on food waste because:

“People are constantly throwing things out that probably aren’t bad.”

Prof. Swager and colleagues have already developed other carbon nanotube devices – including one that can tell when fruit is ripe.

All the devices work on the same principle: the presence of a gas changes any electrical current flowing in the carbon nanotubes, which can be chemically modified so certain changes relate to particular gasses.

In this latest version of the sensor, the team modified the nanotubes so the electrical current changed in the presence of compounds called biogenic amines, such as putrescine and cadaverine, which are produced by decaying meat.

To do this, they modified the carbon nanotubes with metalloporphyrins – compounds that have a metal atom at the center surrounding by several rings containing nitrogen. Hemoglobin, the compound that carries oxygen in the blood, is a metalloporphyrin that has iron at the center.

For this particular sensor, the team used metalloporphyrin with cobalt at its center – this binds very effectively to amines. When the cobalt-containing porphyrin binds to any of the amines given off by decaying meat, it increases the resistance of the carbon nanotube, causing a reduction in the electrical current that is easy to measure.

Prof. Swager and colleagues tested the sensor on pork, chicken, cod and salmon. They found when all four types of meat or fish were refrigerated, they stayed fresh for at least 4 days.

When the samples were not refrigerated, they all went bad much sooner, but at different rates.

The researchers say theirs is not the only sensor that can detect decaying meat, but it is the least expensive and it does not require expertise to use it. Prof. Swager notes:

“The advantage we have is these are the cheapest, smallest, easiest-to-manufacture sensors.”

Roberto Forloni, a senior science fellow at Sealed Air – a major supplier of food packaging – who was not involved in the study, says:

“There are several potential advantages in having an inexpensive sensor for measuring, in real-time, the freshness of meat and fish products, including preventing foodborne illness, increasing overall customer satisfaction, and reducing food waste at grocery stores and in consumers’ homes.”

The sensor – which requires little power – could form part of a wireless platform that Prof. Swager and his team at MIT have developed. The platform allows outputs from this and similar carbon nanotube sensors to be read on a smartphone.

Funds for the research came from the National Science Foundation and the Army Research Office.

Once patents have been obtained, the MIT group hopes to license the invention for commercial use.

In November 2014, Medical News Today learned how a team of researchers is developing a simple coating to encase small batteries and thus render them harmless if they are ever swallowed. Young children – babies and toddlers in particular – can swallow these batteries, resulting in serious damage to their esophagus and gut tissue, sometimes with fatal consequences.