dopamine-producing brain cells. Animal studies show that symptoms can be relieved by

infusing dopamine into the brain, but researchers are still working out how to get

dopamine drugs to cross from the bloodstream into the human brain, which is protected by 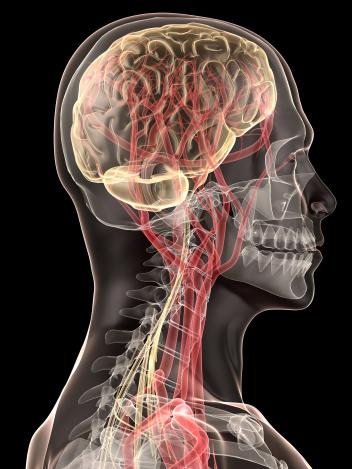 The blood-brain barrier protects the brain from pathogens and toxic agents in the bloodstream.

Now, a team has devised a way to use nanoparticles to ferry dopamine across the

blood-brain barrier and shown it reverses Parkinson’s-like symptoms in rats.

describe their work in the journal ACS Nano.

– is rising faster than ever as our population ages. The progressive disease, which

gradually erodes quality of life as symptoms worsen, is thought to affect around 1 in 500

The new and growing field of nanotechnology is finding many applications in medicine.

with cells in useful ways.

If levels of dopamine drop, the nerve cells cannot communicate effectively, leading to

the shaking and movement problems associated with Parkinson’s.

line nearly all the blood vessels in the brain. It protects the brain and central nervous

system from pathogens and toxic agents that might be circulating in the bloodstream. It

also stops many drugs – including dopamine – from passing into the brain.

Find out more about Parkinson’s

For their study, the team packaged dopamine inside biodegradable nanoparticles that

had already been developed for delivering other drugs to the brain.

The nanoparticles successfully traversed the blood-brain barrier in rats with

the movement problems in the animals.

Parkinson’s and there were no side effects.

The Indian Department of Science and Technology and the Council of Scientific and Industrial Research (India) helped fund the study.

a peptide that may slow Parkinson’s disease. The man-made