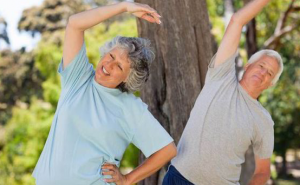 I’m, right now and right here, sitting on the peak of that so-called hill we always talk about. Things could go swell for another 40 years, at which time I’ll be buried by any remaining friends. Or they could blow up in my face and trim my life back by a few decades. My body is no longer resilient to careless experiments. That’s for sure. At almost 40, I do indeed suffer the consequences of an extra shot of espresso, two nights of interrupted sleep, or a chocolate binge.

The forgiveness and flexibility of my youth has officially gone bye-bye.

So I’ve begun to ask myself what the energetic 80-year-olds that swim at the Naval Academy with me are doing differently than the lifeless elderly folks at the senior center I occasionally visit. And, yes, I’ll occasionally pretend to be Barbara Walters and ask nosy questions about what they are doing right (or wrong, but I don’t quite word it like that).

Here are a few observations from my unscientific study, three characteristics or things in common the winners have:

Yep, nearly all of them have a marvelous sense of humor. And this is consistent with a Norwegian study that suggests folks who can laugh at life’s ups and downs live longer. For example, the study, which was presented at a meeting of the American Psychosomatic Society and reported by USA Today, followed a subgroup of 2,015 cancer patients for seven years, and found that the people who could laugh more easily and had a healthy sense of humor were 70 percent less likely to die than the poker-faced guys.

Yep. Each and every one of them was engaged in some type of project: babysitting their grandkids, participating in some writers’ group, working on a literacy campaign, or playing a part in the local theatre group. All the vibrant folks had some passion or life mission that got them up in the morning and gave them reason to wake up another day.

3. They watch what they eat and they exercise.

I was so hoping that this would not be the case, because I am aware that maintaining your weight gets more difficult with every year you hike down from that peak. Metabolisms slow and appetites grow, because energy starts disappearing like coal, and you can’t burn off the calories that used to crank up your metabolic rate. And will power? Well, it’s where the energy is … gone. Many studies have found that exercise keeps the mind in shape as well.

Well, that gives me plenty to work on this week. I don’t know about you.