THC is the main psychoactive component of marijuana that is responsible for the mind-altering effects of the drug, but the exact mechanisms by which it produces such effects have been unclear. Now, researchers have pieced together the clearest picture to date of how THC binds to a specific cannabinoid receptor in the brain to produce the “high” associated with marijuana use. 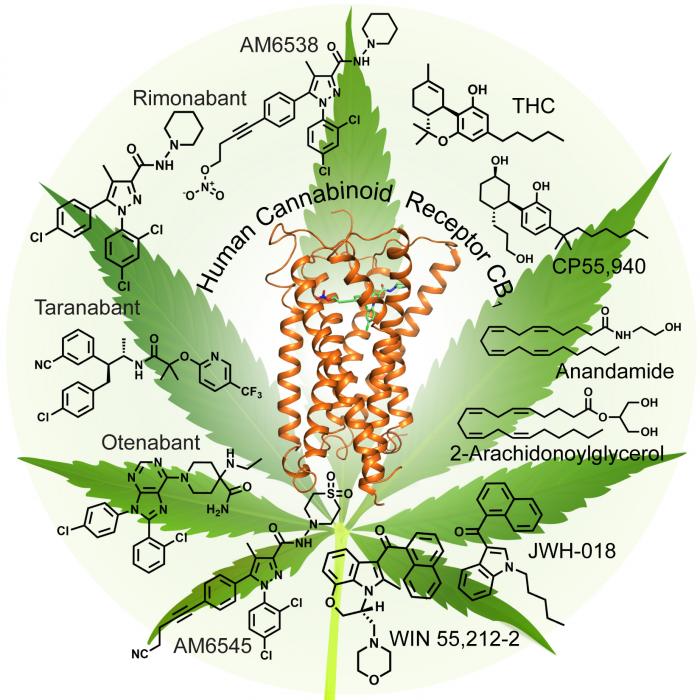 The model of the CB1 receptor demonstrates how molecules such as THC bind to and activate it.
Image credit: Yekaterina Kadyshevskaya, Stevens Laboratory, USC

In a study published in the journal Cell, researchers reveal how they have uncovered the structure of cannabinoid receptor 1 (CB1) – a receptor that is present on the surface of many nerve cells in the brain.

Using the information to create a 3-D model of the receptor, study co-author Raymond Stevens – a professor of Biological Science and Chemistry at the University of Southern California – and team have shed light on how THC and synthetic cannabinoids bind to the receptor.

Stevens and colleagues say their discovery could enhance the development of new marijuana-derived medications, as well as help to better understand the risks of marijuana use.

While marijuana remains the most commonly used illicit drug in the United States, its legalization for both medicinal and recreational purposes is widening.

With use of the drug projected to increase as a result, researchers believe it is more important than ever to fully understand how the active components of marijuana work in the body.

The CB1 receptor is the main target of THC and synthetic cannabinoids – man-made substances that mimic the effects of THC – so the research team focused on finding out more about the structure of this receptor and how it works with specific molecules.

The researchers synthesized AM6538 – a molecule known to tightly bind to and stabilize CB1 – and applied it to the CB1 receptor, which enabled them to determine the receptor’s structure.

By creating a 3-D model of CB1, the team was able to get a more detailed understanding of how THC and synthetic cannabinoids work with the receptor to produce their mind-altering effects.

The researchers say their discovery could aid marijuana-derived drug development, and perhaps solve some of the problems that have already arisen with such medications.

As an example, the team points to a marijuana-based medication that was previously developed for the treatment of obesity; while it was effective against weight gain, the molecules in the drugs were found to trigger depression, anxiety, and suicidal thoughts.

“Researchers are fascinated by how you can make changes in THC or synthetic cannabinoids and have such different effects. Now that we finally have the structure of CB1, we can start to understand how these changes to the drug structure can affect the receptor.”

Additionally, the researchers say their model of CB1 could help researchers gain a better understanding of the side effects associated with synthetic cannabinoids, such as “spice” or “K2,” which were responsible for almost 8,000 calls to U.S. poison centers last year.

“We need to understand how marijuana works in our bodies; it can have both therapeutic potential and recreational use, but cannabinoids can also be very dangerous,” notes co-lead author Prof. Zhi-jie Liu, of the iHuman Institute at ShanghaiTech University in China.

“By doing both the basic science and understanding how this receptor works, we can then use it to help people in the future.”

Read about how heavy marijuana use may raise the risk of osteoporosis and bone fractures.