Lower weight in seniors is associated with an increased risk of dementia, and weight loss correlated with a more rapid decline in Alzheimer’s disease, new research finds. 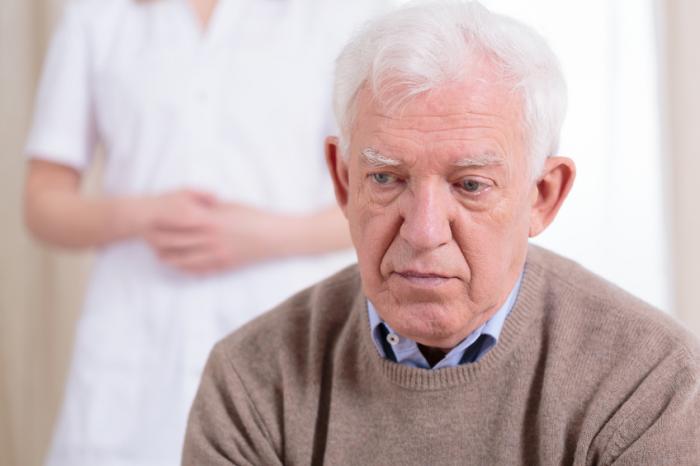 Seniors that are underweight may have a greater risk of Alzheimer’s disease.

The study, conducted by Brigham and Women’s Hospital (BWH) and Massachusetts General Hospital (MGH), observed that older people who were considered cognitively normal and had a lower body mass index (BMI) had more widespread deposits of the beta-amyloid protein in the brain.

Beta-amyloid is a protein that is the primary component of plaques characteristic of Alzheimer’s disease.

The formation of amyloid plaques and neurofibrillary tangles are thought to contribute to the degradation of nerve cells in the brain, which causes the symptoms associated with Alzheimer’s disease.

“Elevated cortical amyloid is believed to be the first stage of the preclinical form of Alzheimer’s disease, so our findings suggest that individuals who are underweight late in life may be at greater risk for this disease,” says senior author Dr. Gad Marshall, of the MGH and BWH Departments of Neurology.

“Finding this association with a strong marker of Alzheimer’s disease risk reinforces the idea that being underweight as you get older may not be a good thing when it comes to your brain health,” he adds.

A “preclinical form” of Alzheimer’s disease is currently a theory rather than an official stage used to guide clinical diagnosis and treatment.

The hypothesized preclinical form of Alzheimer’s includes three stages. In the first stage, the individual is cognitively normal but has raised amyloid deposits. The second stage sees an added level of evidence of neurodegeneration – for example, elevated tau deposits or brain tissue loss typical of Alzheimer’s disease.

The third and final stage adds cognitive changes that are within normal range but are a decline for the individual.

Published in the Journal of Alzheimer’s Disease, the research is a part of the MGH-based Harvard Aging Brain Study (HABS), with the aim of identifying markers that predict those people most likely to develop Alzheimer’s and how soon their symptoms are likely to be noticeable.

The investigation included 280 older adults aged 62-90 years – cognitively normal and in good health – who were among the first to enroll in HABS. The researchers lead an analysis on the relationship between their BMI and the levels of beta-amyloid in their brains.

Participants provided data such as medical histories, physical exams, testing for APOE4 gene – a gene associated with a higher risk of late-onset Alzheimer’s disease – and PET imaging with Pittsburgh compound B (PiB), which can visualize amyloid plaques in the brain.

Results showed – after adjusting for age, sex education, and APOE4 status – lower BMI was associated with greater retention of PiB, which indicated a higher amount of amyloid brain deposits.

The association between weight and extensive amyloid deposits was more prominent in normal-weight participants who had the lowest BMI of the group. Lower BMI and greater PiB retention were most significant in individuals with the APOE4 gene variant.

Future research from the team will focus on explaining the mechanism behind the link between lower BMI and increased amyloid levels.

“A likely explanation for the association is that low BMI is an indicator for frailty – a syndrome involving reduced weight, slower movement and loss of strength that is known to be associated with Alzheimer’s risk.”

“One way to get closer to determining any cause-and-effect relationship will be following these individuals over time to see whether their baseline BMI does predict the development of symptoms, which we are doing in HABS, and eventually investigating whether maintaining or even increasing BMI in late life has an effect on outcomes,” adds Marshall, who is also an assistant professor of neurology at Harvard Medical School.

“Right now, we’re also studying whether BMI is associated with any other clinical and imaging markers of Alzheimer’s disease,” he concludes.

Read about a biochip blood test that has been developed to detect a patient’s risk of Alzheimer’s disease.