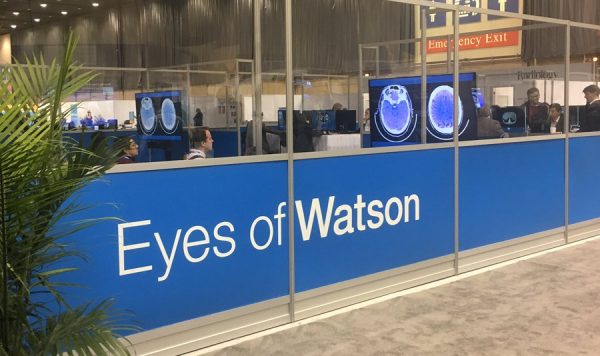 A large radiology practice in the Miami area is the test bed for the first real-world application of IBM Watson interpreting medical images.

Radiology Associates of South Florida, which has more than 75 physicians and handles about 1 million studies per year, is teaming with Baptist Hospital of Miami to apply Watson-powered “cognitive peer review” to medical imaging in an effort to diagnose aortic stenosis earlier.

“We want to identify patients at high risk who may have been missed,” said Dr. Ricardo Cury, director of cardiac imaging at Baptist Hospital of Miami and chairman and CEO of Radiology Associates. Watson speeds up the peer review process by assisting cardiologists and sonographers in spotting stenosis cases that otherwise might fall through the cracks, Cury explained at the annual meeting of the Radiological Society of North America in Chicago late last month.

Watson looks for variations in practice, based on quality metrics and image analytics, explained Jon DeVries, global offering manager for IBM Watson Health Imaging. The review involves the validation and labeling of data.

Physicians can click on the “Ask Watson” button to get an analysis of text and images. Cardiologists see Watson’s assessment before finalizing a decision, and Watson makes sure the proper information ends up in the patient’s electronic health record.

The “Eyes of Watson” and the Miami researchers are trying to answer a series of questions, as this video from IBM Research explains.

“What systematic clinical thought processes are these machines using? Are they similar enough to those of radiologists to be trusted as assistants?” the IBM narrator asked.

Cury had another question: “How will that have an impact in an episode of care?”

The ultimate goal is to improve value, based on efficiency of clinicians, how radiologists receive, prioritize and validate data, and how a report will have an effect on patient outcome, including cost and length of stay, Cury explained.

The first phase of the program involves concept, design and validation of data sets. “We are working with IBM Watson to define strategies and case studies for machine learning to explore,” Cury said. In the next phase, which Cury hopes to have underway by the end of 2017, radiologists will apply cognitive learning prospectively in their practice.

This technology, IBM’s first cognitive offering in medical imaging, should hit the market late in the first quarter, according to DeVries.

Meantime, Eyes of Watson, a joint effort of IBM Research and RSNA, will be an ongoing project. RSNA will incorporate Eyes of Watson into its Case of the Day emails. IBM will be studying whether or not Watson agrees with radiologists, DeVries explained.

“We are very intrigued with cardiovascular applications,” for example, patients presenting in the emergency department with chest pain, Cury said. “That may be where we go next.” He also is interested in exploring the technology for oncology, including detection of lung and breast cancers.

When You Eat On A Regular Basis Can Help Combat Jet Lag Yet?

Voted To Influence The Identity Of The Candidate More Policy

Who In The Drug Innovation Management Of 50 + Market?Have You Decided On