A cherry angioma is a mole-like skin growth made up of small blood vessels, or capillaries. It is the most common type of angioma, which is a benign tumor that results from an overgrowth of capillaries.

It is rare for children to develop these noncancerous lesions. Cherry angiomas most commonly appear in adults older than 30.

Cherry angiomas are related to aging and tend to increase in number with age. They occur in up to 50 percent of adults, according to one study published in American Family Physician.

Cherry angiomas get their name from their appearance. Their bright red color is due to the broken capillaries. 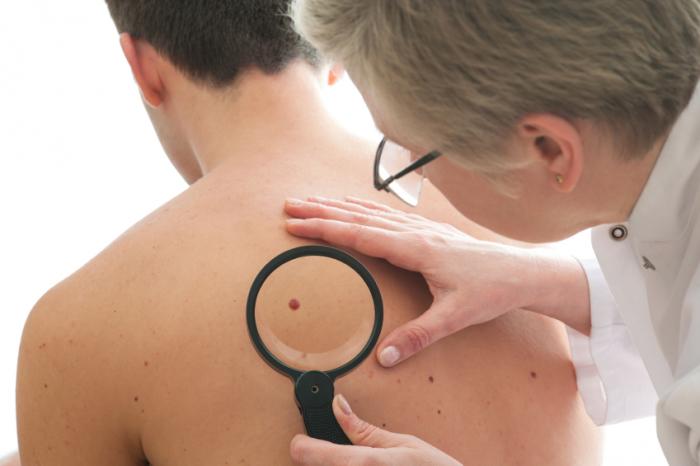 Cherry angiomas are often found on the chest, stomach, and back.

However, cherry angiomas can range in color and may also look blue or purple. If pressure is applied to them, they might momentarily turn white.

Cherry angiomas can also range in size, but commonly grow to be a few millimeters in diameter. As they get bigger, the angiomas usually form round, dome shapes with smooth, flat tops.

These growths can appear anywhere on the body, but they are most often found on the chest, stomach, and back. It’s not uncommon that cherry angiomas appear in multiple numbers, although this could be a sign of another issue.

Cherry angiomas may be confused with spider angiomas, which also have a signature red mole. The difference between the two is that a spider angioma has distinctive reddish extensions that expand out from the red spot. The extensions look similar to the threads in a spider’s web.

The causes of cherry angiomas are largely unknown, though experts believe they tend to be genetic. Age is a contributing factor, and cherry angiomas increase in number and size after age 40.

There is some research that suggests exposure to bromides may be associated with cherry angiomas. Bromine is a chemical compound found in many everyday items, including baking ingredients, prescription drugs, and plastic.

At present, there is little firm evidence to support this theory. More research needs to be carried out in this area.

If someone is in direct contact with bromine often, this may be something they can speak to a doctor about and be tested for.

The appearance of a cherry angioma is not usually concerning as they are almost always harmless. However, if anyone notices a sudden outbreak of several lesions, it’s a good idea to visit the doctor. Although rare, these spider angiomas could signal a developing problem, such as liver damage.

Medical attention is also recommended if the angioma begins to bleed, feel bothersome, or change in appearance. Those who wish to have the lesions removed for cosmetic purposes should schedule an appointment with their doctor to review their options.

Treatment and outlook for cherry angiomas

Most often, treatment for cherry angiomas is strictly cosmetic, as they pose no serious threat. There are four common options for treating angiomas.

This method involves cutting or shaving the lesion off the skin. The doctor will usually apply a local anesthetic first to minimize pain. There may be some pain and discomfort after the procedure, however. Excision can also result in some scarring.

This is a method also known as electrocautery that involves burning off skin growths. It is commonly used for benign tumors like cherry angiomas, less serious skin cancers, and pre-cancers.

First, the doctor will likely inject a local anesthetic. Then, they will touch the abnormal tissue with an electric needle to destroy the blood vessels and essentially scrape the angioma off. The wound is then dressed until it heals.

Like with excision, this method can cause some discomfort after the procedure. Electrodesiccation usually leaves a small, white scar.

This is another common method used to treat skin growths that works by freezing off the tissue. First, the doctor will spray or swab liquid nitrogen on the area to freeze it. This causes the angioma to blister or peel before falling off. In some cases, the angioma may scab before it’s removed.

A laser passes through the skin, and the blood vessels in the angioma absorb the beam. After the treatment, it’s normal for the angioma to disappear, or turn gray or another darker color. It will then fade over the next 2-4 weeks. 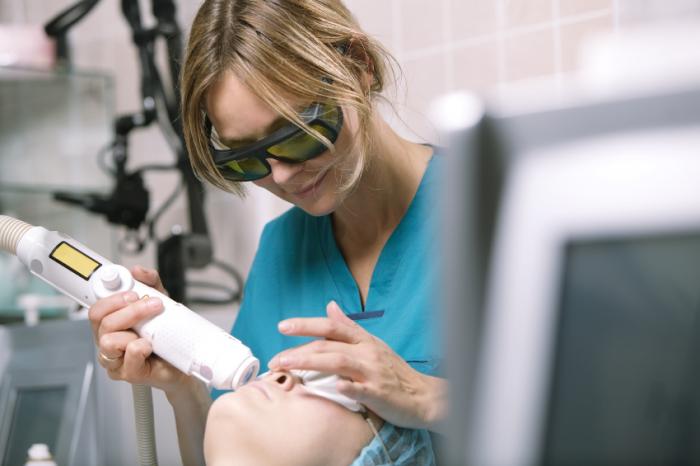 Laser treatment is one of several methods for treating a cherry angioma.

On average, two treatments are needed for the best results, but results vary by skin tone. For some smaller angiomas, a single treatment may be enough.

Patients should see improvement after each treatment. It’s important to avoid sun exposure for about 4 weeks before and 2 weeks after laser treatment for best results and minimal side effects.

In general, the various methods for angioma removal are similar in levels of discomfort and effectiveness. It is best for patients to discuss with a doctor which option is best for them.

It’s also important to remember that although angiomas can be removed, they can sometimes return after treatment. Patients should keep an eye on healing and improvement after any removal treatment. Any worsening or abnormal changes should be reported to a doctor.

It is not recommended that people attempt to remove a cherry angioma at home for a number of reasons. Firstly, it’s critical that a doctor confirms that the skin growth is a cherry angioma and not a lesion that needs a more careful look.

Secondly, attempting to shave, cut, burn, or freeze a cherry angioma can be very painful and lead to infection if done by an amateur. Doctors are professionally trained to remove skin growths, and they do so in sterile environments using sterile tools.

Anyone who wishes to have a cherry angioma removed for cosmetic reasons should consult their doctor to discuss the options.

There are a number of home remedies that use apple cider vinegar, iodine, or tea tree oil to shrink or remove cherry angiomas. However, there is no scientific evidence that any of these natural solutions are effective.

Before taking or applying any new medication, it’s always a good idea to talk to a doctor to make sure they’re safe to use.