Human immunodeficiency HIV virus is caused by a virus. In 1983, the human immunodeficiency virus was first discovered in the United States. It is a human immune system cells infected with lentivirus (Lentivirus), belongs to a retrovirus.
HIV by disrupting the body’s T lymphocytes, thereby blocking the process of cellular and humoral immunity, resulting in paralysis of the immune system, thereby resulting in the spread of various diseases in the human body, eventually leading to AIDS. Because of extremely rapid variability of HIV, difficult to produce specific vaccine, no effective treatment so far, pose a great threat to human health. 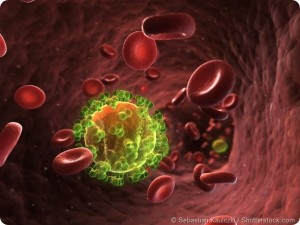 Results of recent surveillance conducted by the European Centre for Disease Prevention and Control (ECDC) and the WHO Regional Office for Europe indicate that the annual number of newly diagnosed HIV infections in Europe reached an all-time high in 2014.

WHO Regional Director for Europe, Dr Zsuzsanna Jakab, commented “Despite all the efforts to fight HIV, this year the European Region has reached over 142 000 new HIV infections, the highest number ever. This is a serious concern. With all the evidence on HIV prevention and control, including new treatment guidelines, we call on European countries to take bold action and curb the HIV epidemic once and for all.”

HIV (human immunodeficiency virus) was at the forefront of everybody’s minds during the 1980’s when the AIDS (acquired immunodeficiency syndrome) pandemic began and HIV was first identified as the causal agent. With improved education regarding prevention of HIV transmission and the development of life-saving antiretroviral treatments, we were comfortable that its absence from the news indicated that it was under control.

ECDC Acting Director, Dr Andrea Ammon, highlighted that sex between men is still the leading cause of HIV transmission in Europe:

HIV diagnoses among men who have sex with men have been rising at an alarming rate from 30% in 2005 to 42% in 2014 with increases in all but six EU/EEA countries”
She added that “Europe has to scale up its efforts to reach out to this group – this includes looking at new strategies such as pre-exposure prophylaxis for HIV and access to care”.

With effective treatments for HIV now available, the number of cases of people with HIV developing AIDS is decreasing. However, there is still a significant proportion of cases, particularly in Eastern Europe where HIV is only diagnosed when symptoms begin, at which stage the immune system has already started to fail. In 2014, two thirds of AIDS diagnoses in Europe were due to late diagnosis of HIV; the infection was already well developed so treatment could not prevent it developing into AIDS.

WHO global HIV prevention and treatment guidelines urge for early treatment of HIV infection to improve the prognosis of the infected individual and to prevent onward HIV transmission. Initiatives are thus needed to promote the benefits of early testing for HIV and facilitate access to testing for people who think they may be infected with HIV. Such measures will ensure more HIV-positive people benefit from available treatment options and hopefully help reduce the spread of HIV.