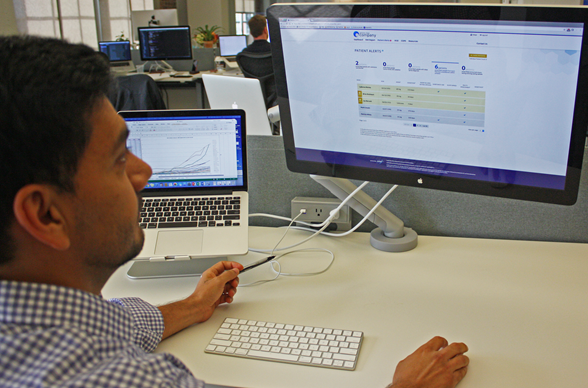 The Centers for Disease Control and Prevention published guidelines earlier this year in a bid to reduce opioid dependence sparking a mixed bag of support and outrage. The challenge to find ways to easily and efficiently manage opioid abuse is one that has attracted several healthcare startups, some of which have approached this subject from the perspective of patients or clinicians or both.

Axial Healthcare in Nashville, Tennessee developed a set of clinical support tools to analyze claims data and coordinate pain treatment between pharmacists, physicians and their patients. The company has raised $16.5 million in a Series B, according to a news release. The funding will be used to ramp up Axial’s customer base and double the size of the 50-staff workforce over the next 12-18 months, Axial Healthcare CEO John Donahue said in a phone interview. He added that insurers work with the company to give their providers access to Axial’s services. The health IT vendor’s client base includes large insurers and accountable care organizations.

Donahue noted that part of the startup’s mission is to check opioid misuse while supporting evidence-based care, physicians, and patients. Among the services Axial enlists are predictive analytics, a provider dashboard, network performance monitoring, and consultation between pharmacists and providers. The business also developed an app for patients with chronic pain.

Axial Insight, for example, offers a snapshot of a patient’s medical costs associated with chronic pain, assessing how many of the patient’s physicians prescribed pain medication at different touch points in their care from primary care physicians to ER doctors. The company’s toolbox also includes a provider dashboard, network performance monitoring, and an app for patients with chronic pain. Physicians can access these services from an electronic health record or portal, Donahue said.

Venture firm Oak HC/FT led the funding round, which included participation from existing investors such as .406 Ventures, BlueCross BlueShield Venture Partners, and Sandbox Advantage Fund. Axial has raised $26.5 million to date, including a $10 million Series A round last year, Donahue noted.

Although the company declined to share data on the effectiveness of its clinical support services, Donahue did say Axial had received an innovation study grant from the Centers for Medicare and Medicaid to identify episodic payment mechanisms to manage chronic pain in alternate payment models. He added that the business plans to publish data on the effectiveness of its platform later this year or early next year.

Part of the debate on chronic pain management revolves around the contention by patient advocates and some physicians that the CDC’s guidelines don’t take into consideration the patient’s perspective or physician’s judgment. A sample of some of the other startups in this space that seek to address this obstacle are PainQx, which makes a case for using EEG to objectively gauge patient pain. Another is CNS Therapy, a University of North Carolina spin-off, that’s developing an electrical stimulation treatment for chronic pain patients called Systolic Extinction Training. The goal is to address perceived pain, which shows up in scans even without tissue damage.

“Uninstall” Shoes Will Help Your Arthritis?