behavior, an imbalance of which is thought to contribute to depression. Less well-known

is that scientists estimate 90% of serotonin is made in the gut, and imbalances in this

and cardiovascular disease, to osteoporosis. 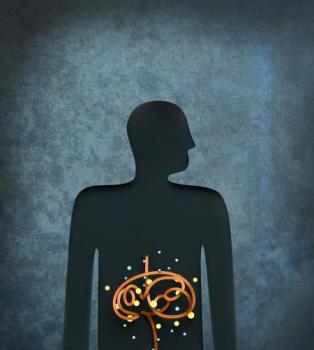 90% of serotonin is made in the gut.
Image credit: E. Hsiao/Caltech

Now, researchers from the California Institute of Technology (Caltech) in Pasadena

an important role in the production of peripheral serotonin.

engineering at Caltech, says studies of mice and other lab animals are increasingly

gut microbes and the nervous system talk to each other, and:

“To start, we explored the idea that normal gut microbes could influence

levels of neurotransmitters in their hosts.”

In the gut, there are three types of cell we know of that produce serotonin: immune

For their study, Prof. Hsiao and colleagues wanted to find out which cells the gut

microbes might be influencing to have an effect on serotonin levels.

In the first part of the study, they compared peripheral serotonin levels produced

from these cells in two groups of mice: one with normal gut microbes and another group of

The team found that in the germ-free mice, their EC cells produced around 60%

less serotonin than the mice with normal gut bacteria.

And when they restored bacteria colonies in the gut of the germ-free mice, their EC

were interacting with the EC cells to make serotonin.

They introduced single species and groups of gut microbes one by one into the germ-free mice, and found that serotonin levels went up when there was a certain mix of about

movement of food through their digestive tract. It also changed activity in their blood

platelets, which use serotonin to boost clotting.

Further exploration in cell cultures revealed some of the molecular mechanisms

When the researchers increased these metabolic byproducts in germ-free mice,

it increased their levels of peripheral serotonin.

Other investigations have shown bacteria can make serotonin on their own. The

interaction between bacteria and host cells.

Prof. Hsiao says a lot more research needs to be done before findings like theirs are

ready for clinical use, and offers a word of caution:

“We identified a group of bacteria that, aside from increasing serotonin,

likely has other effects yet to be explored. Also, there are conditions where an excess

of peripheral serotonin appears to be detrimental.”

Researchers are also discovering other surprising things about serotonin in the body.

For example, Medical News Today recently learned how a previously unknown source of serotonin could affect

cells) is that they take a while to kick in. A study led by the University of Florence

found that the source of this extracellular serotonin is not what experts have assumed,

and finding out more about it should help improve drugs that target serotonin.