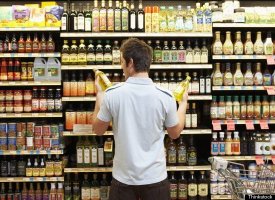 MIAMI, FL – JANUARY 28: Miami Children’s Hospital pediatrician Dr. Amanda Porro, M.D prepares to administer a measles vaccination to Sophie Barquin,4, as her mother Gabrielle Barquin holds her during a visit to the Miami Children’s Hospital on January 28, 2015 in Miami, Florida. A recent outbreak of measles has some doctors encouraging vaccination as the best way to prevent measles and its spread. (Photo by Joe Raedle/Getty Images) | Joe Raedle via Getty Images

In the wake of recent measles outbreaks, pollsters have noticed a trend: Younger Americans are considerably less convinced of vaccines’ safety, less likely to see the vaccination issue as a matter of public health and less inclined to support mandatory vaccinations for childhood diseases.

One theory for this divide holds that vaccines are, in a way, a victim of their own success. Since the measles vaccine became widespread more than 50 years ago, younger Americans are far less likely to have had any personal experience with the disease.

“We do have … really a generation that has not seen these diseases,” Dr. Anne Schuchat, the director of the National Center for Immunization and Respiratory Diseases, said in a January press briefing.

A new HuffPost/YouGov poll shows exactly how stark that generational difference is. Three-quarters of Americans aged 65 or older have had measles, compared to just 4 percent of adults under 30. The same is true of polio, for which a vaccine first became widely available in the 1950s.

While few people in any age group represented in the poll had suffered from polio themselves, 56 percent of those in the oldest age group knew someone who had. In contrast, just 9 percent of respondents under 30 knew a polio survivor. 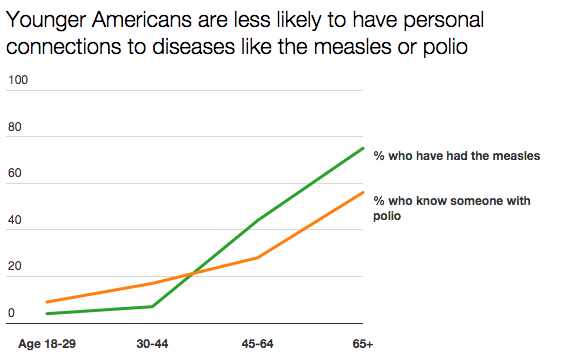 There’s also a notable age divide in perceptions of how great a threat these diseases pose. Forty-eight percent of those 65 and older — but just 19 percent of adults under 30 — say infectious diseases like the measles are a very serious problem for the country. 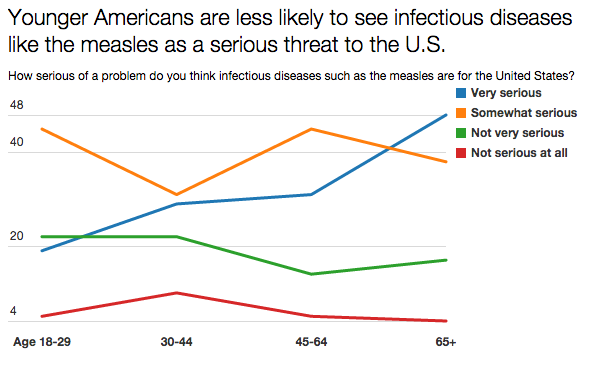 While the majority of adults under 30 say diseases such as measles are less of a threat now than they were 50 years ago, a 45 percent plurality of those over 65 believe the threat has actually increased.

Adults in the middle two age groups fall somewhere in between. Those between the ages of 30 and 44, who also are unlikely to have suffered from measles, are about as likely as their younger counterparts to think vaccinations should be mandatory, but are more likely to say infectious diseases pose a very serious threat. Respondents aged 45-64, nearly half of whom had had measles, hold views closer to the oldest group.

It’s not clear from the poll’s results that personal experiences translate directly into opinions on vaccinations. People who have had measles are 13 points more likely to support mandatory childhood vaccinations than those who don’t know anyone who has had the disease. Along age lines alone, the divide is much greater. The results do, however, underscore just how much the experience of younger Americans differs from that of previous generations.

The HuffPost/YouGov poll consisted of 1,000 completed interviews conducted from Feb. 13-16 among U.S. adults using a sample selected from YouGov’s opt-in online panel to match the demographics and other characteristics of the adult U.S. population.

The Huffington Post has teamed up with YouGov to conduct daily opinion polls. You can learn more about this project and take part in YouGov’s nationally representative opinion polling. Data from all HuffPost/YouGov polls can be found here. More details on the poll’s methodology are available here.