Palpable breast lumps! Sister started crying immediately thought they certainly terrible breast cancer. According to statistics, in China every 20 among women have a breast cancer patient, especially in recent years, its incidence is increasing. No wonder my sister are particularly worried. Third Affiliated Hospital of Sun Yat-sen A breast surgery physician Liuren Bin pointed out that many benign breast disease will take a lump of a way to give women “signals”, such as breast hyperplasia, breast cysts, breast fiber adenoma. Women do not have to panic too much, it is recommended to go to the hospital for diagnosis. 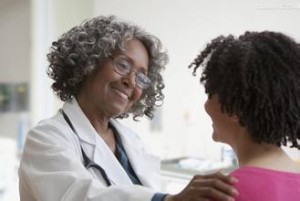 White-collar Zhang, 25-year-old, she touched their breasts for lumps bath, fearing suffering from breast cancer, a few days sleep well, weekend break immediately see a doctor. Like Sally’s fear, expressed Liuren Bin clinical too much. It is understood that more than half of China’s women will have breast lumps or nodules, but most lumps and nodules are not cancer, there are four common diseases need to be identified –

Mastitis: to occur in lactating women. But occur in non-lactating mastitis among plasma cell mastitis is now more common, this is a chronic mastitis breast nonbacterial inflammation. Often accompanied by breast tenderness, swelling, often palpable breast lumps may be formed after the progression of breast abscess.

Breast fibroma: This is the most common benign breast tumor, mainly in young women, after the 40-year-old rare. Lumps were round rule, generally not more than 4 cm in diameter, texture, real tough, clear boundary, activity degree, and the skin adhesion. Fibroadenoma no pain, and slow the growth of fibroids, within a year the growth is normal within 5 millimeters.

Breast Cancer: In earlier usually no pain or discomfort. Breast tumor growth faster, the surface is not smooth, hard, ill-defined and difficult to promote. Such tumors are often found to have been a large, local skin ulceration, infiltration, pain when the late. It can cause nipple retraction, and the occurrence of axillary, supraclavicular lymph node metastasis and organs, life-threatening.

2, mass inquiry: it will be cancer?

Palpable lump in the breast will be “cancer” it? Liuren Bin pointed out that young women daily palpable mass, most of which are breast hyperplasia and breast fibroids, the patient is clinically the most concerned about the topic.

1 views: the vast majority of breast hyperplasia is not cancerous.

He explained that breast hyperplasia is the most common benign breast disease, the incidence rate of breast disease in the first place. According to the survey, about 80% of women have varying degrees of breast hyperplasia, more common in women aged 25-45. The main symptoms of cyclical breast pain is characteristic, especially in the premenstrual pain intensified, menstrual pain diminished or disappeared.

For breast hyperplasia, a few months after the onset of some patients to 1–2 years can often relieve itself, and more without treatment. Current treatment for the symptomatic treatment of breast hyperplasia basic, no effects of drugs. Women just regular breast specialist to do B-ultrasound, can be early prevention of breast cancer.

Point 2: clinical breast fibroadenoma is the most common benign breast tumor, little to do with breast cancer, malignant transformation rate is very low.

Liuren Bin reminders, fibroids during pregnancy can occur suddenly grew sarcoma. Women over the age of 40, especially those who fibroids after menopause and menopause, will increase the risk of malignancy.

When palpable breast lumps are mostly small capsules, patients are most concerned about is the need treatment. Liuren Bin said that the current effects of drugs on breast fibroma small, surgery is the only method of treatment. However, due to multiple breast fibroma may be dispersed in various parts of one or both sides, so the surgical removal of all there are certain difficulties. So, for those not too large volume of multiple adenomas, clinical medicine treatment can be; for which of those larger, more than 2 cm adenomas, may be considered for removal, adenomas smaller person, you can continue It is observed.

3, the face of mass: regularly check!

Not all lumps are benign, so women have regular breast examination every year. Advisable in every 2 to 3 days after menstruation can be a touch of self-examination to see if there is no change in shape of breast pain, lumps, discharge, etc., should be noted that, with the pulp palpation instead fingertips, but not hand Zhuanie breasts.

When the self-test, it is recommended to face the mirror, hands on his hips, observed double breast shape, contour without exception, then raised his arms to observe double breast shape, skin, nipple, contour without exception, the general order of pulp touching breasts top, medial, downward, lateral lumps, then lying supine, slightly padded shoulders, raised his right arm, his left hand touching the breast, breast caudate lobe and right armpit lumps, and back to the right hand touch the left, Note also that the nipple and areola area for lumps.

Liuren Bin stressed that the self-test alone is not enough, it is recommended annually to do the relevant checks Hospital Breast Surgery. Women 40 years of age do every year specialist medical examination and breast ultrasound B; women over the age of 40, in addition to doing specialist breast examination and B-year, we must also do a mammography to detect early breast cancer. It is understood that the Third Affiliated Hospital recently introduced the latest testing equipment – video synthesizer molybdenum target drone, the detection sensitivity is higher than ordinary mammography, mammography can find common undetectable breast cancer endometriosis.

The clinical symptoms of breast cancer:

Breast skin changes may be caused by a variety of symptoms, the most common is the breast skin tumor invasion of the connection and deep chest myofascial Cooper ligament to shorten and lose elasticity, pulling the corresponding parts of the skin, a “dimple sign” That is a small depression in breast skin, like a small dimple same. If cancer cells clog the lymphatic vessels, “orange peel-like change” occurs, that the breast skin many small punctate depressions, like, like orange peel. Advanced breast cancer, the cancer cells along the lymphatic vessels, or fibrous glandular tissue infiltration into the skin and the growth of the main foci in the skin around the formation of hard nodules scattered distribution, so-called “satellite skin nodules.”

4, the nipple and areola abnormalities