At present, to diagnose the bacteria behind an antibiotic-resistant infection, doctors have to send

samples to the lab and wait days for a result. Now, researchers have found a way to shrink the days of waiting to

hours, using simple chip-based technology that could fit in a benchtop device. 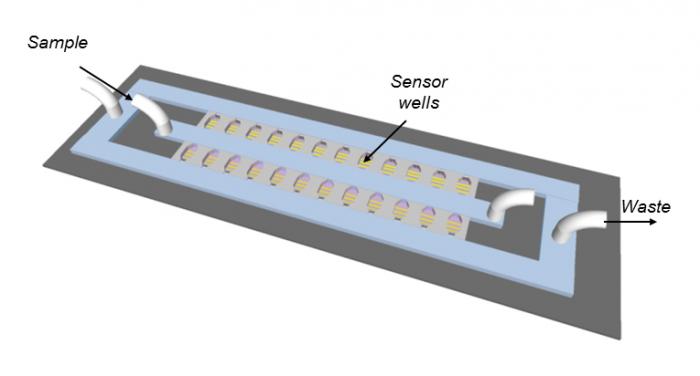 The bacteria are cultured in tiny wells, each with

a filter to trap them, and electrodes to read out their metabolism.
Image credit: University

The team, from the University of Toronto in Canada, describes the new technology and how they tested it, in

the journal Lab on a Chip.

Antibiotic resistance is a growing public health problem, compounded in part by the imprecise use of

Because it currently takes 2 or 3 days for a lab test to identify the bacteria behind an infection,

doctors start patients off on a broad spectrum antibiotic.

Sometimes this “one size fits all” approach works, but sometimes it does not, and it is only when the lab

A more rapid test that can be done locally means the doctor could give the right drug straight away,

and cut down on exposure of bacteria to antibiotics.

Lead author Justin Besant, a PhD researcher in the Institute for Biomaterials and Biomedical Engineering at

“Guessing can lead to resistance to these broad-spectrum antibiotics, and in the case of serious infections,

to much worse outcomes for the patient.”

No need to wait for bacteria to grow in culture

Infection with a resistant version of a bacterium can turn a routine hospital stay into a nightmare. Every

year in the US, 2 million people contract antibiotic-resistant infections, and more than 23,000 die from

The reason current tests take days and not hours is because you need a high concentration of bacteria. So the

increases to a detectable level.

that squeezes bacteria from the patient sample into just two nanolitres in volume. In that minuscule space, the

chip can increase the effective concentration of the bacteria.

The chip is made of glass patterned with microfluidic wells. At the bottom of each well is a filter made of

microbeads that catch the bacteria as the sample flows through the chip.

The bacteria collect in the tiny wells, together with the test antibiotic and a molecule called resazurin

that sends out an electrochemical signature.

Bacteria metabolize resazurin into resorufin, so if they stay alive, the electrochemical signature changes

from the resazurin one into the resorufin one. But if the antibiotic kills the bacteria, then the signature

stays as the resazurin one.

Technology could fit into a ‘very small benchtop instrument’

“One, we have a lot of bacteria in a very small space, so our effective starting concentration is much

higher. And two, as the bacteria multiply and convert the resazurin molecule, it’s effectively stuck in this

nanolitre droplet – it can’t diffuse away into the solution, so it can accumulate more rapidly to detectable

concentration with a simple electrochemical readout. The result is a tool that will help diagnose and treat

bacterial infections much faster, they suggest.

There are faster ways to diagnose antibiotic resistant bacteria using fluorescence detection, but these

methods require bulky and expensive microscopes to look at the results. Besant explains the obvious advantage a

device based on their approach offers:

instrument, and this is something you could see in a doctor’s office, for example.”

He sees the next step as the creation of a device that can test several antibiotics at the same time, at

Cluster-Chip, promises to open up new ways to study metastasis, the main cause of cancer deaths.