Twenty years ago, Dolly the sheep proved to the world that cloning was possible, but her poor health didn’t exactly engender much confidence in the process.

However, her siblings, cloned from the same cell line, are serving as living proof that cloning is perhaps a viable, safe technology. They’re the equivalent of sheep senior citizens, and they’re still in good health. These four sheep cloned from Dolly’s cell line, as well as nearly a dozen other clones, are part of an ongoing study at the University of Nottingham to determine the long-term health effects of cloning.
Twenty Years On 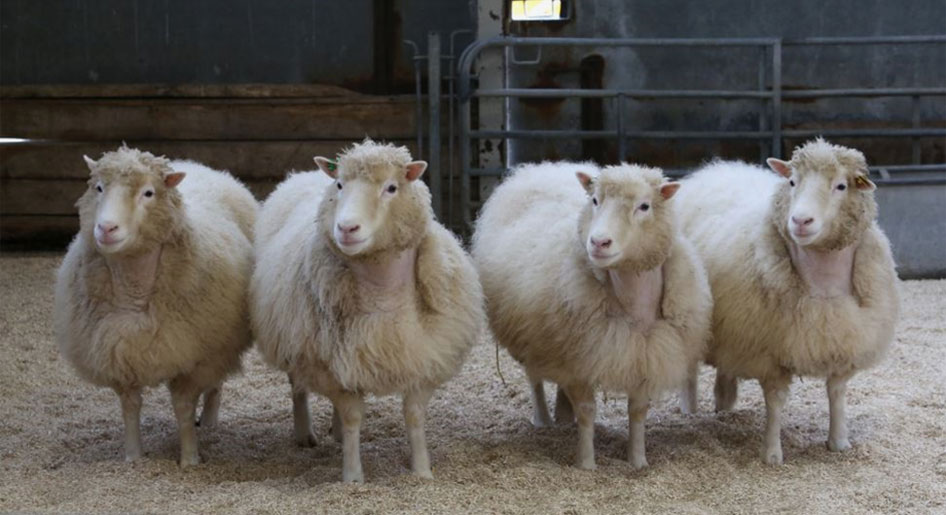 Dolly died in 2003 at the age of six from complications of a common ovine lung disease — sheep usually live to be 11 or 12 years old. Dolly also suffered from relatively severe arthritis, leading to speculation that her poor health was the result of the cloning process.

Her siblings — Debbie, Denise, Dianna and Daisy — have recently turned nine and appear to be in fine health. They have been under the care of Kevin Sinclair, a professor of Developmental Biology at Nottingham, who took over the Dolly project after one of its founding members, Keith Campbell, passed away in 2012.

Previous studies in mice indicated that cloned animals tended toward obesity and were at a greater risk for diabetes. To find out if Dolly’s siblings suffered any ill effects of the cloning procedure, a team of researchers assessed the sheep for fitness across a range of indicators last year. Researchers tested a number of health indicators: glucose tolerance, insulin sensitivity, heart rate and blood pressure. They also conducted musculoskeletal and radiological exams to check for arthritis as well as X-rays and MRI exams.

The results came back back looking completely normal, say the researchers in a paper published Tuesday in Nature Communications.

“By and large these animals are remarkably healthy and fell within a normal distribution that we would expect from these animals,” says Sandra Corr, a researcher in the School of Veterinary Medicine and Science at Nottingham, and who was involved with the tests for arthritis.

Compared with other animals, the sheep display relatively low levels of osteoarthritis, she says, a marked difference from Dolly. Part of the reason for this may be the attentive care the sheep have received over their lifetimes.
A Win for Cloning Procedure

The researchers say that this is the first longitudinal health study of clones created through Somatic Cell Nuclear Transfer (SCNT), the process by which Dolly was created. SCNT involves taking the nuclear DNA from a somatic, or non-sexual cell, and placing it in an egg, which is then induced to begin the process of creating life.

“Clearly there’s a population of cells, which upon nuclear transfer, have resulted in embryos which have undergone nearly complete reprogramming and resulted in not only a viable pregnancy but … also aged adult offspring, which for all intents and purposes seem to be completely normal,” says Sinclair. “There’s every reason to believe that there is a target that we can aim for, and that is normality.”

Despite being clones, the sheep are not perfect replicas of Dolly, though. While the cloning process utilizes the exact same nuclear DNA in each identical offspring, each sheep possesses different strands of mitochondrial DNA. While mitochondrial DNA makes up only a tiny fragment of a genome, it could still be responsible for some small differences between clones.
Improving Reliability

The challenge now is to refine the SCNT process to the point where it would be viable on a commercial scale. Dolly was the only one of 277 attempts at cloning to reach adulthood, but the researchers say they have now reached efficiencies of around 20 percent.

Despite these drawbacks, researchers around the world are pushing forward with commercial applications of the technology. Various methods of cloning have been refined to the point where researchers in South Korea now claim to be producing 500 cloned animals a day, and others are attempting to resurrect dead species.

This particular method of cloning may never be efficient enough to work with human cells, however, to say nothing of the ethical and legal questions surrounding the issue.