Osteosarcoma is the more common form of malignant bone tumors occur in young people under 20 years old or children, the most common bone cancer in children, and about 5 percent of pediatric tumors. 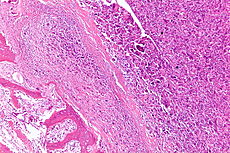 Children diagnosed with osteosarcoma may be impacted by a DNA imprinting defect also found in parents, according to new research from the Masonic Cancer Center, University of Minnesota. DNA imprinting is a phenomenon in which just one of the two inherited genes is active while the other is present but inactive.

The study is published now in the journal Oncotarget.

Osteosarcoma is a type of bone cancer predominantly affecting children and adolescents. The five year survival rate is about 70 percent, a rate unchanged in over 30 years. Recent research has shown a connection between downregulation of microRNAs and the development and progression of osteosarcoma. In this study, researchers wanted to know if the specific gene and microRNA expression changes associated with osteosarcoma could be due to epigenetic alterations and, specifically, if these alterations are also present in a parent.

Lead author Jingmin Shu, Ph.D., and the team assessed DNA methylation changes as well as reviewed histone modifications in both normal bone tissues and patient samples. Taking an even closer look, researchers also determined the imprinting status of a specific genomic location using the DNA from buccal swab samples from both osteosarcoma patients and their unaffected parents. Simultaneously, they observed pronounced imprinting defects in certain mouse models of osteosarcoma.

They also cautiously noted that a larger cohort study is needed.

Other notable findings include:

1.Extent of gene expression and DNA methylation changes may identify the advancement of the disease.
2.The imprinting defect researchers found is unique to osteosarcoma.
3.Imprinting defects are not the result of pre-existing mutations in the mouse model.