Biologists have discovered a weakness in a group of brain cancer cells that could lead to a new treatment for glioblastoma, the deadliest form of the disease. 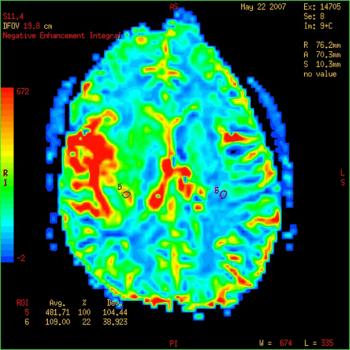 The researchers found a subset of brain tumor cells over-express an enzyme that could be a new target for drugs.

Writing in the journal Nature, the team, including members from Massachusetts Institute of Technology (MIT) and the Whitehead Institute for Biomedical Research, in Cambridge, MA, describe how they found a subset of glioblastoma tumor cells over-express an enzyme that breaks down an amino acid.

Without the enzyme – called GLDC – the brain tumor cells die due to buildup of toxic byproducts of metabolism.

Dr. Kim is a postdoc researcher in the lab of senior author David M. Sabatini, member of the Whitehead Institute
and professor of Biology at MIT.

The team came across GLDC when they were looking into diseases known as “inborn errors of metabolism.” These diseases – many of which affect the brain – arise when cells lack certain enzymes that are important for healthy functioning.

One example of a disease caused by an inborn error of metabolism is phenylketonuria. This rare genetic condition is where the body cannot break down the amino acid phenylalanine, which builds up in the blood and brain. Patients with the disorder must follow a special low protein diet and avoid eating phenylalanine to prevent intellectual disability and seizures.

Cells also need GLDC to break down the amino acid glycine. Loss of GLDC leads to a disorder called nonketotic hyperglycinemia, which causes glycine buildup in the brain and can result in severe mental retardation.

GLDC is often overactive in a subset of glioblastoma cells. The team found this happens only in glioblastoma cells that also over-express a gene called SHMT2, which converts the amino acid serine into glycine.

The team found that the brain cancer cells are so dependent on GLDC that when they lose it, they die.

When they investigated further, the researchers found SHMT2 is most highly expressed in glioblastoma cells in areas that are very low in oxygen and nutrients – areas known as “ischemic regions.”

Ischemic regions often occur in the center of tumors, where blood supply is poor. The researchers found SHMT2 helps cells survive in this low-oxygen environment because of its effect on PKM2, an enzyme that helps breaks down glucose and is also involved in making new cancer cells. Dr. Kim explains:

“Cells that have high SHMT2 activity have low PKM2 activity, and consequently low oxygen-consumption rates, which makes them better suited to survive in the ischemic tumor microenvironment.”

The high activity of SHMT2 in this oxygen-poor environment leads to lots of glycine, which the cells must break down using GLDC.

Without GLDC, the cancer cells break down glycine in a way that eventually kills them

The researchers found that without GLDC, the cells try to break down glycine via a different route, which generates toxic products that build up and kill them.

The researchers suggest a compound that blocks GLDC in these cells could lead to a potential new treatment for glioblastoma. They are now looking for such a compound.

The American Brain Tumor Association, the National Institutes of Health, and the Koch Institute funded the research.

In October 2014, Medical News Today learned about a proof-of-concept study published in the journal Stem Cells that showed a new way to use stem cells to fight brain cancer by getting them to produce and release toxins that only kill tumor cells without harming the stem cells.