A study of the crystalline 3-D structure of an insulin extracted from the venom of a marine snail reveals a potential way to make insulin for the treatment of diabetes act more rapidly. 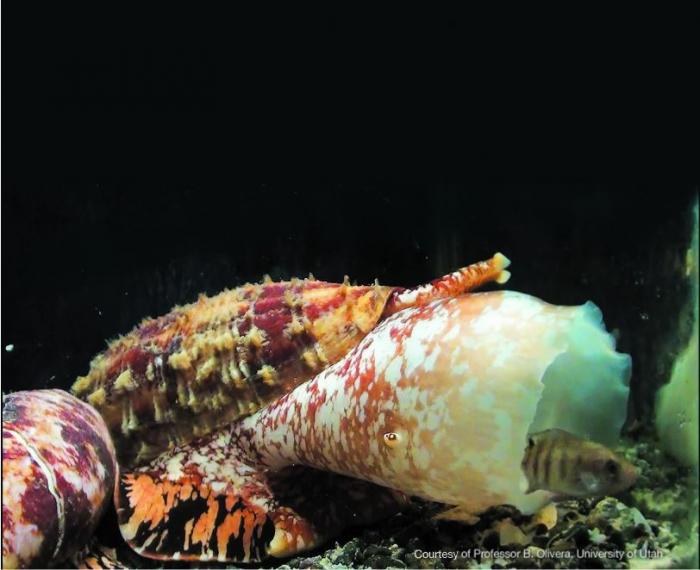 The venom of the marine cone snail contains a fast-acting insulin that puts its prey into hypoglycemic shock.
Image credit: Prof. B. Olivera/University of Utah

Researchers from Australia and the United States have discovered that the venom of Conus geographus contains a highly efficient natural protein – called Con-Ins G1 – that operates faster than human insulin.

They also found that the protein is able to bind to human insulin receptors, suggesting it could work as a treatment for diabetes.

The team reports the findings in the journal Nature Structural & Molecular Biology.

Diabetes is where the body either does not make enough insulin (type 1 diabetes) or cannot use it properly (type 2 diabetes).

The body needs insulin to allow blood sugar (glucose) to enter cells for use as energy. If the body has insufficient insulin, or loses the ability to use it properly, the sugar builds up in the blood.

According to figures from the World Health Organization (WHO), the number of people worldwide with diabetes has gone up from 108 million in 1980 to 422 million in 2014.

Rates of diabetes have been rising faster in middle- and low-income countries. The WHO estimate that by 2030, diabetes will be the seventh leading cause of death worldwide.

For their study, Mike Lawrence, associate professor at the Walter and Eliza Hall Institute of Medical Research in Melbourne, Australia, and colleagues, used the Australian Synchrotron to analyze the 3-D structure of the cone snail venom insulin protein.

Prof. Lawrence, an expert in the study of insulins – and how they enter cells via gateways guarded by specialist proteins called receptors – explains their exciting discovery:

“We found that cone snail venom insulins work faster than human insulins by avoiding the structural changes that human insulins undergo in order to function – they are essentially primed and ready to bind to their receptors.”

Human insulin is “clunky” compared with the way the snail venom insulin works, he adds.

Human insulin contains an extra component that acts as a “hinge” that has to open before the molecule can perform the “handshake” with the cell receptor in order to enter.

However, when they studied the 3-D structure of the snail venom insulin, the team found a way to remove the hinge from the human insulin. This could speed up communication with the receptor and help the insulin get in the cell much more quickly, Prof. Lawrence explains.

The study builds on earlier work that found the marine cone snail uses an insulin venom to capture its prey. The snail uses the venom to immobilize unsuspecting fish that swim into its invisible trap.

The insulin-containing venom puts the fish into a state of hypoglycemic – low glucose – shock.

Dr. Helena Safavi-Hemami, a research assistant professor in the biology department at the University of Utah in Salt Lake City, supervised the study alongside Prof. Lawrence.

She says they were fascinated to discover how the insulin in the snail venom acts so quickly, and then that it held the key to making human insulin more effective.

“We were thrilled to find that the principles of cone snail venom insulins could be applied to a human setting,” notes Dr. Safavi-Hemami.

“The next step in our research, which is already underway, is to apply these findings to the design of new and better treatments for diabetes, giving patients access to faster-acting insulins.”