Epidemics of dengue virus are linked to temperature rises of El Niño, a periodic weather phenomenon that coincides

with warmer sea surface temperatures across parts of the equatorial Pacific. 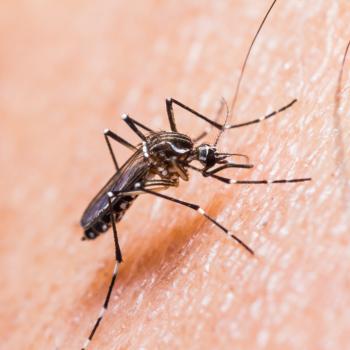 The dengue virus is most commonly spread by the Aedes aegypti mosquito.

swept through eight countries of Southeast Asia in 1997 and 1998 during an intense El Niño event.

The team – comprising scientists from 18 institutions around the world, including the ministries of health of the

countries affected – analyzed a huge set of data spanning 18 years of monthly dengue surveillance on a total of 3.5

that the most intense El Niño in nearly 20 years is currently developing in the Pacific, suggesting it presages a

surge in dengue cases throughout Southeast Asia early next year.

The senior author of the study is Derek Cummings, a biology professor who was with the Johns Hopkins Bloomberg

School of Public Health in Baltimore, MD, when the study began and is now with the Emerging Pathogens Institute at

the University of Florida.

Prof. Cummings says that while dengue infects large numbers of people in the tropics every year, rates of

infection vary widely from year to year, and:

“During years of large incidence, the number of people requiring hospitalization and care can overwhelm health

systems. If we can understand the factors that contribute to these increases, we can prepare for them and act to

mitigate the impact of the disease.”

Urban areas act as ‘pacemakers’ for the spread of dengue

Find out more about dengue fever

Every year, hundreds of millions of people in the tropics and subtropics are infected by the dengue virus, which

is transmitted through the bites of mosquitoes – most commonly the Aedes aegypti mosquito. There are four

strains of the virus, known as DENV1, -2, -3 and -4. There are no specific treatments and no vaccines as yet,

although some are in development.

The new study makes two key discoveries: one is that increased temperature leads to increased rates of

dengue across the region.

Prof. Cummings says they were really struck by how synchronized the incidence of dengue was over such a large

area, spanning thousands of kilometers, and notes that:

patterns in each individual country.”

Co-author Lam Sai Kit, a professor at the University of Malaya in Malaysia, says the findings should help us better

“Now that the new El Niño has started, these findings will help us prepare for a worst-case scenario,

and immediate measures can be taken to counter its effect in the next few months.”

inexpensive, rapid paper-strip test that works like an over-the-counter pregnancy

test to help diagnose dengue, Ebola and other diseases in the field.