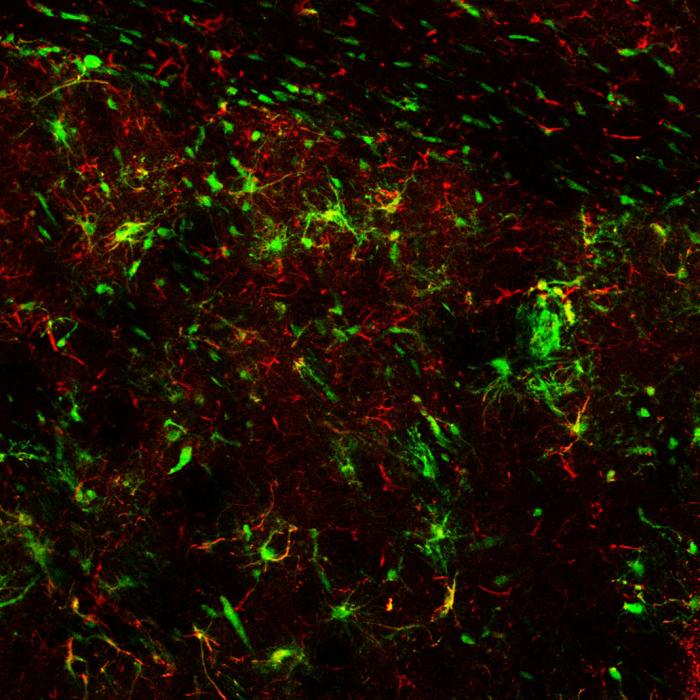 The researchers, including neurobiologists from the University of California-Irvine (UCI), publish their study in the journal

Stem Cell Reports. While there is still a long way to go, the researchers hope stem cell transplants will one day be

used to treat dementia with Lewy bodies in human patients.

cells. It rarely strikes before the age of 65.

Dementia with Lewy bodies (DLB) is estimated to account for 10-25% of dementia cases, and is thought to be the most common

cause of dementia following Alzheimer’s disease and vascular dementia.

visual perception, such as being able to judge where objects are in space.

and disrupt communication between brain cells, resulting in death of brain cells.

Because DLB kills brain cells, the researchers had the idea that it may be possible to use stem cells to regenerate new

brain cells in the areas damaged by the disease. So they set out to test the idea in mice.

For their study, the team transplanted mouse brain stem cells into mice genetically engineered to develop many of the key

A month after the transplants, they put the mice through various behavior tests and compared the results with how they

performed before the transplants.

The treated DLB mice showed significant improvements in both motor and cognitive function, note the authors. For

example, they could recognize new objects more readily and they could run on a rotating rod for much longer than untreated DLB

On further investigation, the team found that the stem cells enhanced two brain features that become dysfunctional in DLB.

These features are neurons that produce the chemical messengers dopamine and glutamate. The researchers found that the stem

Enhancing the function of these neurons coaxes brain cells in the regions affected by DLB to connect and communicate better,

and this, in turn, results in improved motor and cognitive function.

BDNF plays a critical role, but does not work so well on its own

To verify that it was the BDNF in the stem cells that led to the improvements, the team carried out the experiments again

using stem cells that could not produce BDNF. When they transplanted them into the DLB mice, they found the BDNF-deficient stem

cells did not improve behavioral function nor enhance dopamine and glutamate signaling.

Using a virus to deliver the growth factor into the brains of DLB mice, the team then ran a final set of experiments

to see if BDNF alone could affect the improvements. This led to good recovery of motor function but limited improvement in

The researchers conclude that while BDNF appears to play a critical role, it cannot do it on its own – it has to work

through the stem cells to result in improvements in both cognitive and motor function.

While the team is hopeful that one day DLB will be treatable by transplantation of BDNF-producing neural stem cells, they

acknowledge there is still a long way to go and a lot of hurdles to overcome, as Mathew Blurton-Jones, an associate professor

of neurobiology and behavior who led the UCI team, explains:

“Many important questions remain before we could envision moving forward with early-stage trials. For example,

However, should the approach overcome all these hurdles, then there is also the potential of using it to develop treatments

for other neurodegenerative diseases that involve BDNF, dopamine and glutamate, such as Huntington’s disease and Alzheimer’s.

Writing in the journal Nature Cell Biology, the researchers describe how they restored organ function in severely