Anyone looking forward to a caramel apple treat this Halloween should make sure they eat only freshly made or refrigerated ones; otherwise, they may risk listeria infection, according to a study published this week in mBio. 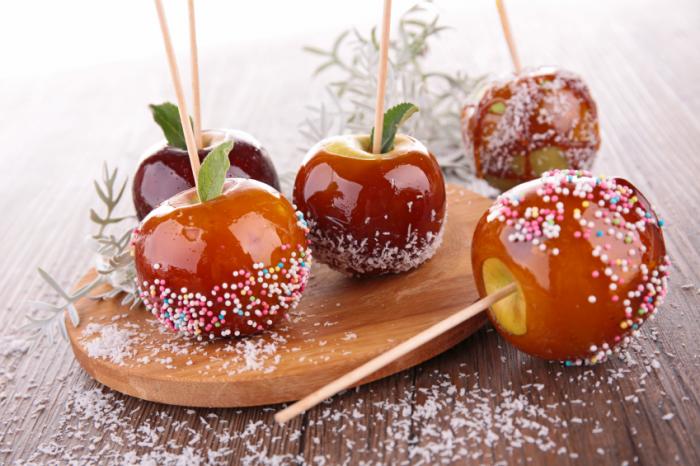 Caramel apples on sticks should be stored in a refrigerator.

In late 2014, an outbreak of listeriosis occurred in which 35 people from 12 states were infected and seven people died. Of 31 people interviewed, 28 of them had eaten commercially produced, prepackaged caramel apples before becoming ill.

At the time, three manufacturers put out a voluntary recall of prepackaged caramel apples.

Caramel apples punctured with dipping sticks and left unrefrigerated over the course of a couple of weeks may harbor a bacterium called Listeria
monocytogenes.

Listeriosis symptoms include fever, headache, stiff neck and gastrointestinal illness. They may not appear until 3-4 weeks after eating affected foods.

Kathleen Glass, PhD, and colleagues from the University of Wisconsin-Madison’s Food Research Institute studied listeria growth on a group of Granny Smith apples dipped in caramel and stored at either room temperature or in the refrigerator.

They prepared a cocktail of four L. monocytogenes strains associated with the outbreak and swabbed it on the skin, stem and calyx regions of a group of Granny Smith apples.

Wooden sticks were inserted through the stems of half of the apples. The researchers dipped all the apples into hot caramel, using either the sticks or tongs, then allowed them to cool.

Apples on sticks at room temperature are not safe

The apples were then stored either at 77 or 44.6 degrees Fahrenheit for up to 4 weeks.

The team found that the average population of L. monocytogenes increased 1,000-fold on caramel apples with sticks stored at room temperature for 3 days. On the apples stored without sticks at room temperature, listerial growth was delayed.

Neither caramel, because of its low amount of water, nor apples, because of their acidity, are normal breeding grounds for listeria, according to Glass, the lead author.

However, when a stick is inserted into the apple, a small amount of juice migrates to the surface, and that moisture, trapped under a layer of caramel, creates a microenvironment that facilitates growth of any L. monocytogenes cells already present on the surface of the apple.

“Dipping the apples in hot caramel killed off a lot of the surface bacteria. But those that still survived were the ones that were able to grow. If someone ate those apples fresh, they probably would not get sick. But because caramel-dipped apples are typically set out at room temperature for multiple days, maybe up to 2 weeks, it is enough time for the bacteria to grow.”

Caramel apple manufacturers can prevent problems by thoroughly disinfecting apples before dipping them in caramel and adding growth inhibitors to the caramel coating or apple wax. Additionally, they should ensure better temperature-time controls to inhibit the growth of L. monocytogenes.