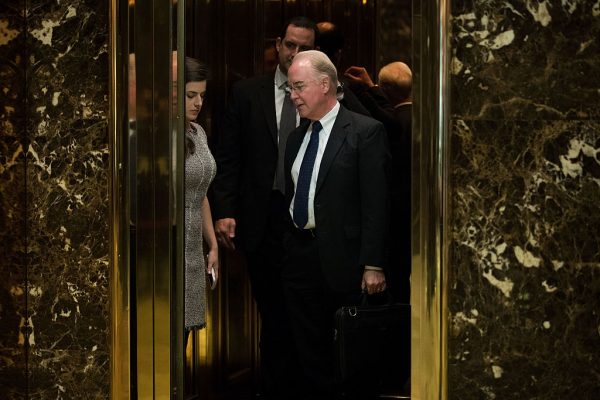 Rep. Tom Price (R-Georgia), chairman of the House Budget Committee, is President-elect Donald Trump’s pick to lead the Department of Health and Human Services. Trump will make an official announcement Tuesday, according to multiple news reports.

Price, an orthopedic surgeon from a heavily conservative district outside Atlanta, has been one of the most vocal critics in Congress of the Affordable Care Act.

“Ostensibly, the ACA’s primary intent was to expand access to underserved populations, but simply having an insurance card does not ensure that a patient has access to quality, affordable health care,” wrote Price and two other physician-legislators in an op-ed that appeared in the JAMA Forum in October. “Unfortunately, the all-out push to ensure access to health insurance is having 2 serious adverse effects: it’s making premiums unaffordable for middle-class individuals who are ineligible for subsidies and it’s increasing out-of-pocket costs, deductibles, and co-payments.

Price has pushed his own bill — Empowering Patients First Act — since 2009, the year before the ACA passed. He has reintroduced the bill in subsequent years. In its latest form, the proposal would allow refundable, age-adjusted tax credits with amounts tied to average insurance for people who buy insurance on the individual market and don’t have access to a government or employer plan.

For example, people between 18 to 35 years of age would be eligible to receive $1,200 in tax credits.

“The Empowering Patients First Act puts patients, families, and doctors in charge by focusing on the principles of affordability, accessibility, quality, innovation, choices and responsiveness,” Price said in a statement in May after reintroducing the bill. “Those principles form the foundation of the solutions in H.R. 2300 – solutions including individual health pools and expanded health savings accounts, tax credits for the purchase of coverage and lawsuit abuse reforms to reduce the costly practice of defensive medicine. The solutions in the Empowering Patients First Act will get Washington out of the way while protecting and strengthening the doctor-patient relationship.”

His plan would also allow people to opt out of Medicare and Medicaid and receive a tax credit to buy insurance on the individual market.

That has brought him closer to House Speaker Paul Ryan (R-Wisconsin) who has proposed to privatize Medicare. That may well become a reality in 2017.

Price was one of the House GOP committee chairs to help Ryan draft the “A Better Way” proposal as an alternative to the ACA. He met with Trump in New York on Nov. 16 to advise the president-elect on the transition.

If confirmed, Price would be the first physician to lead HHS since Dr. Louis Sullivan in the George H.W. Bush administration, 1989-1993. Sullivan also came to Washington from the Atlanta area.

The pick already is drawing divisions along party lines on social media. A reporter for the liberal New Yorker tweeted this possible explanation for Trump’s affinity for Price.

Sat next to Trump’s HHS pick Tom Price on a flight a few years ago. Seemed decent enough til he said he wasn’t sure of Obama’s citizenship.

Numerous Republicans and conservatives praised the pick, including a former House speaker.

Congressman Tom Price will be a great Secretary of Health and Human Services.He is the right leader to help Congress replace Obamacare.