Research released by the Massachusetts Institute of Technology describes an adhesive patch that can deliver a triple-combination of drug, gene, and light-based therapy to colorectal tumors. 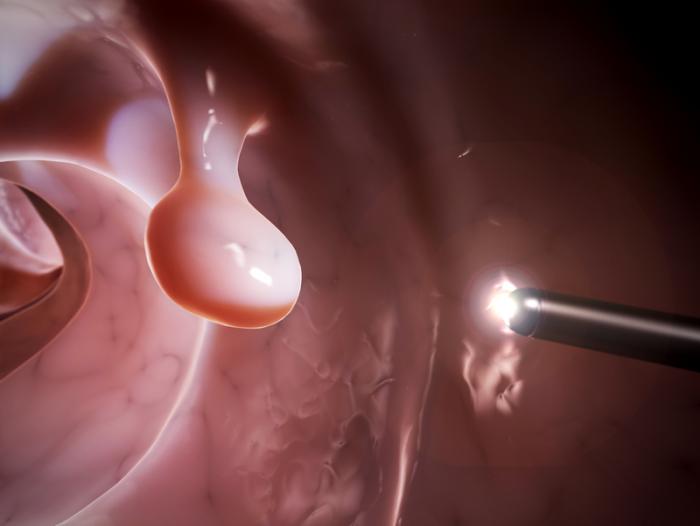 The triple-therapy patch could be used to treat any remaining cancer cells at the tumor site after surgery.

Most colorectal cancers begin as a growth, or tumor, on the inner lining of the colon or rectum called a polyp, and they can change to cancer over many years. Not all polyps become cancer.

It usually takes around 10-15 years for abnormal cells to grow into colorectal tumors. With regular screening, polyps can be removed before they develop into cancer.

Although the type of treatment for colorectal cancer largely depends on the stage of cancer, treatment options are often surgery, chemotherapy, and radiation therapy.

Surgery can sometimes result in incomplete removal of the tumor, which can potentially lead to recurrence and an increase in the risk of spread of cancer to other organs. Tumors recur in around 50 percent of cases.

Current therapies that are designed to prevent tumors repeatedly occurring are unable to tell the difference between cancerous cells and healthy cells, leading to severe side effects.

Cancer treatments such as chemotherapy drugs treat the body as a whole, and not a particular area, which often means that only a small amount reaches the tumor site – 0.7 percent in one study.

The paper, published in Nature Materials, explains the ability of the triple-combination patch to administer treatment to the tumor site before or after surgery.

Natalie Artzi, a research scientist at Massachusetts Institute of Technology’s (MIT) Institute for Medical Engineering and Science (IMES) and an assistant professor of medicine at Brigham and Women’s Hospital – who led the research – says that the patch dispenses the combination of three treatments locally at the tumor site, and it may increase the therapy’s effectiveness.

She adds: “This means that we are treating both the source of the cancer – the tumor – and the metastases resulting from that source, in a suboptimal manner. That is what prompted us to think a little bit differently, to look at how we can leverage advancements in materials science, and in particular nanotechnology, to treat the primary tumor in a local and sustained manner.”

The triple-therapy hydrogel patch treats any remaining cancer cells at the tumor site after surgery to prevent cancer from returning and spreading to other locations.

Gold nanorods – contained in the patch – heat up when near-infrared radiation is applied to the local area and destroys the tumor. A chemotherapy drug is then released to target the tumor and surrounding cells.

The gold nanospheres that do not heat up in response to the near-infrared radiation deliver RNA – or gene therapy -to the site, which silences an important oncogene in colorectal cancer and forms the third and final line of treatment. Oncogenes are genes that can cause healthy cells to transform into tumor cells.

Researchers foresee that the patch could be applied to the inner surface of the colon – after the tumor is removed – to safeguard against leftover cells and recurrence at the site. The patch will gradually release all three therapies as it degrades.

Artzi suggests that the patch could also help to shrink tumors before their removal.

The most significant finding was that the triple combination therapy alone was enough to destroy the tumor without the need for surgery.

“This administration modality would enable, at least in early stage cancer patients, the avoidance of open field surgery and colon resection. Local application of the triple therapy could thus improve patients’ quality of life and therapeutic outcome.”

Future work of the team will focus on experiments to use colonoscopy equipment to inject the patch to the site of a tumor.

Read about how colorectal cancer patients are less likely to make a good recovery after treatment if they have depression.