A new study published in the journal Gut reveals how researchers have created a breath test that could be used to diagnose stomach cancer, as well as predict whether an individual is at high risk for the disease. 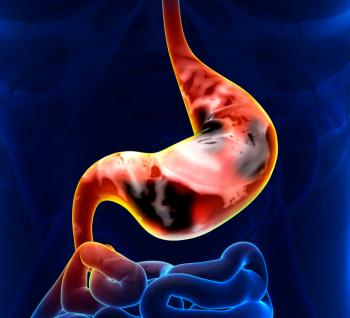 It is estimated that around 24,590 people in the US will be diagnosed with stomach cancer, or gastric cancer, this year.

It is estimated that around 24,590 people in the US will be diagnosed with stomach cancer, or gastric cancer, this year. It is most common among older people, with 69 being the average age of diagnosis in the US.

Stomach cancer rarely causes symptoms in its early stages, making it hard to detect. If it does cause symptoms, these include poor appetite, weight loss, abdominal pain and nausea, which can often be mistaken for other conditions.

As such, only 1 in 5 stomach cancers in the US are diagnosed before the cancer has spread to other parts of the body, emphasizing the need for tools that can detect the disease in its early stages – something that would dramatically improve treatment outcomes.

In this latest study, Prof. Hossam Haick, of the Israel Institute of Technology, and colleagues looked to the use of nanoarray analysis for the early identification of stomach cancer. The technology can detect tiny changes in gut compounds that are exhaled in an individual’s breath.

The researchers say past studies have investigated nanoarray analysis for the detection of stomach cancer, but they note that these studies have not assessed whether the technology could be used to identify precancerous changes.

Prof. Haick and colleagues obtained two breath samples from 484 individuals, of whom 99 had already been diagnosed with stomach cancer but had not yet been treated with chemotherapy or radiotherapy.

The participants had fasted for 12 hours prior to the breath samples being taken and had refrained from smoking for at least 3 hours beforehand. In addition, subjects were tested for infection with Helicobacter pylori infection – an established risk factor for stomach cancer – and their smoking and drinking habits were analyzed.

The researchers used gas chromatography-mass spectrometry (GCMS) – a technology measures the levels of volatile organic compounds (VOCs) in exhaled breath – to analyze the first breath sample from each participant, while a combination of nanoarray analysis and pattern recognition was used to analyze the second breath sample.

On applying the nanoarray technique to the breath samples, the team found it was effectively able to distinguish between breath-print compositions in participants with stomach cancer and those at low and high risk of the condition. The method achieved 73% sensitivity, 98% specificity and 92% accuracy, according to the results.

These results remained even after accounting for potential confounding factors, such as age, alcohol intake and use of proton pump inhibitors – drugs that reduce stomach acid production – according to the team.

While GCMS technology is unable to be used for stomach cancer screening due to its high cost and complexity, the researchers say nanoarray analysis may be a highly accurate and cheaper alternative.

“The attraction of this test lies in its noninvasiveness, ease of use (therefore high compliance would be expected), rapid predictiveness, insensitivity to confounding factors and potentially low cost.”

In 2011, Medical News Today reported on another study by Prof. Haick and colleagues, in which they revealed how an artificial electronic “nose” could be used to screen patients for head and neck cancer.