who would most benefit from assessment of heart risk. Now, a new study presented at a 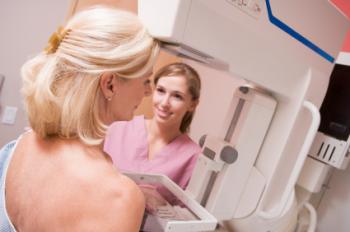 could play an important role in identifying women

who may benefit from coronary artery disease prevention.

One of the investigators, Laurie Margolies, associate professor of radiology at the

“The opportunity to diagnose cardiovascular risk on mammography heralds a

through breast tissue. In breast cancer screening, images of the breast are analyzed for

From the X-ray images, it is possible to detect tumors that cannot be felt. Screening

indicate the presence of breast cancer.

Striking relationship between calcification of breast arteries and coronary

Prof. Margolies and colleagues set out to investigate whether the amount of calcium

with cardiovascular disease and death. Therefore, the team wanted to explore if breast arterial

For their study, they looked at imaging results from 371 women who had a digital

mammogram and chest CT scan performed within 1 year of each other.

From the mammograms, they derived a breast arterial calcification (BAC) score based on

the number of blood vessels affected and the extent of calcification. Scores for coronary artery calcification (CAC) were obtained from the CT scan.

scans, the team found a striking relationship between the two.

And as the BAC score went up, there was a corresponding rise in CAC score.

who may benefit from coronary artery disease prevention.

It would also mean no additional cost, time and radiation exposure, they note. Prof.

“Providing this knowledge to patients and ordering physicians increases

the opportunity for patients to take advantage of cardiovascular risk-reduction

strategies while screening for breast cancer.”

are continuously married, divorced women may have a