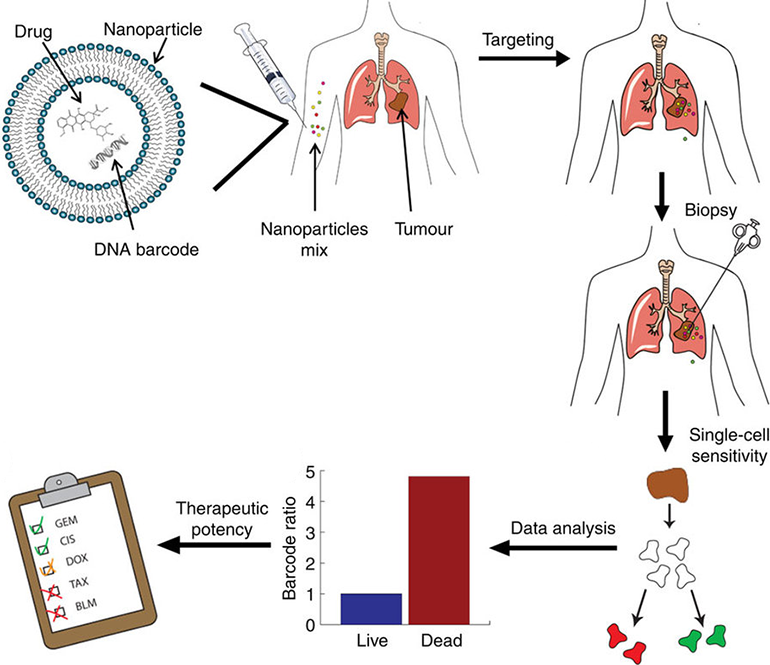 Determining which medication is ideal for treating a patient’s unique cancer is usually a hit-and-miss affair. A drug is tried and then the tumor monitored for changes. If it works the patient is kept on the same medication, but if it doesn’t time is lost and the tumor has only grown. Now researchers from Technion Institute of Technology in Israel are reporting on a way of tagging cancer drugs so that one can identify which are gathering around and killing a tumor and which are not.

The nanoparticles that delivered the drugs have strands of synthetic DNA attached to them, which are the actual “barcodes” used to later spot the effect of the drugs. The drugs themselves are encapsulated within nanoparticles that can safely travel through the bloodstream and stick to tumors. They then release the drugs and let their effects kick in precisely where needed.

In order to find out which drugs are working, a biopsy of a tumor is performed and the synthetic DNA identified and correlated to the drugs administered.

So far this has been performed on laboratory mice, comparing a real cancer drug versus a placebo. The cancer drug successfully attacked the tumor while the placebo moved on, something that was identified using the DNA barcoding two days after the drug delivery. The same technology doesn’t only work for cancer medication and should be translatable to other drugs used to treat a variety of conditions.

The Best Cholesterol-lowering Drugs Statins? Study On The