A drug used to treat athlete’s foot and another to treat eczema have shown promise for reversing multiple sclerosis, a new study reveals. 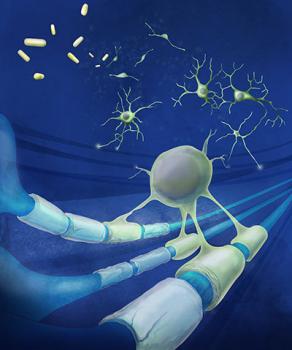 It is believed to be an autoimmune disorder, in which the immune system mistakingly attacks healthy tissue in the central nervous system (CNS). Myelin – the protective coating surrounding the nerve fibers – is damaged in the attack, as well as the cells that produce myelin, called oligodendrocytes. The underlying nerve fibers may also be damaged.

It is this CNS damage that leads to symptoms of MS, including loss of balance, poor coordination, muscle weakness and numbness, blurred vision and poor memory and concentration.

But according to senior author Dr. Paul J. Tesar, of the Case Western Reserve School of Medicine in Cleveland, OH, and colleagues, two nonprescription medications – miconazole and clobetasol – may hold the key to reversing CNS damage sustained in patients with MS.

In their study, published in the journal Nature, Dr. Tesar and colleagues focused on finding a way to promote myelin repair. They looked to oligodendrocyte progenitor cells (OPCs) – stem cells that generate myelin-producing oligodendrocytes.

It is known that OPCs multiply in the brains of adults with MS, almost as a response to myelin damage. However, these OPCs fail to take action and make new myelin.

Dr. Tesar and colleagues set out to identify drugs that have the ability to stimulate OPCs and increase myelination.

“To replace damaged cells, the scientific field has focused on direct transplantation of stem cell-derived tissues for regenerative medicine, and that approach is likely to provide enormous benefit down the road,” notes Dr. Tesar.

“We asked if we could find a faster and less invasive approach by using drugs to activate native nervous system stem cells and direct them to form new myelin,” he continues. “Our ultimate goal was to enhance the body’s ability to repair itself.”

According to the researchers, studying OPCs in the past has been challenging as they are difficult to isolate.

As such, the team developed a technique that allows them to create large quantities of human and mouse OPCs that can be analyzed in a petri dish.

Dr. Tesar and colleagues used a state-of-the-art microscope to rapidly assess the effects of more than 700 drugs on OPCs. The compounds tested were taken from a drug library managed by the National Institute of Health’s National Center for Advancing Translational Sciences (NCATS).

From screening the drugs. The team identified two – miconazole and clobetasol – that stimulated OPCs to produce myelin. Miconazole is an antifungal medication commonly used to treat skin infections, such as athlete’s foot and jock itch. Clobetasol is a steroid used to treat eczema and other skin conditions.

The researchers then injected these two compounds into mouse models of MS. They found that both drugs stimulated OPCs and enhanced myelination. What is more, they reversed paralysis in the mice, enabling them to use their back legs.

“It was a striking reversal of disease severity in the mice. The drugs that we identified are able to enhance the regenerative capacity of stem cells in the adult nervous system. This truly represents a paradigm shift in how we think about restoring function to multiple sclerosis patients.”

Using current drug forms for systemic human use could be dangerous

While further research is needed before miconazole and clobetasol can be tested in human clinical trials for the treatment of MS, the team points out that the compounds proved effective for stimulating human OPCs in a petri dish, which holds hope they will be effective for myelination in humans.

They stress, however, that the safety of injectable forms of the two drugs in humans is not known, as they are currently only available in topical forms. Dr. Tesar says using present versions of the compounds for system human administration could pose dangers.

“We appreciate that some patients or their families feel they cannot wait for the development of specific approved medications,” he adds, “but off-label use of the current forms of these drugs is more likely to increase other health concerns than alleviate multiple sclerosis symptoms. We are working tirelessly to ready a safe and effective drug for clinical use.”

However, once a drug is approved for clinical use and if it proves effective in enhancing myelination, the researchers say it could treat a number of other disorders involving myelin damage or loss, such as cerebral palsy, age-related dementia and schizophrenia.

“It is clear that the discovery of drugs that control the function of stem cells in the body represents a promising new era in regenerative medicine.”

Medical News Today recently reported on a study by UK researchers who suggest a drug used to treat epilepsy may be effective for protecting eyesight in patients with MS.