A team of researchers are studying a remote hunter-gatherer community in the Peruvian Amazon with the express purpose of answering a single question: What did our digestive systems look like before antibiotics and fast food?

They now have some insight into how diverse ancient human gut bacteria was thousands of years ago — and how our modern intestinal colonies have changed as a result of our industrialized lifestyles.

A Matses woman with a traditional tattoo around her mouth. Tattoos link the Matses to an ancestral association with feline gods, according to researcher Alexandra Obregon-Tito.

Compared to a traditional agricultural community living in the Andean Highlands (also in Peru) and an urban-industrialized community in Norman, Oklahoma, the hunter-gatherers — a sovereign tribe, the Matses — boasted stunning bacterial diversity in their guts, including the presence of the genus, Treponema. This type of gut bacteria diversity, as well as the specific genus Treponema, has been found only in non-human primates and other hunter-gatherer communities in Burkina-Faso and Tanzania. The discovery provides scientists with a theoretical baseline for how human gut bacteria flourishes away from the influences of urbanization and industrialization.

Treponema is related to other bacteria that help metabolize our food. In doing so, it also releases chemicals that are anti-inflammatory and aid in the health of the colon. While Lewis has yet to prove any beneficial link between Treponema and the health of the Matses, he speculates that this type of bacteria are likely bestowing benefits to their hosts.

Because the Matses live in the Amazon, the community has been “geographically, historically and socially” isolated for many years, Lewis said. They live in a “pocket of natural hyperdiversity,” where they hunt or gather wild tubers, plantains, fish and occasional game meat like monkey, sloth and alligator. If they eat dairy foods, it’s only because a rare visitor has brought some to share. 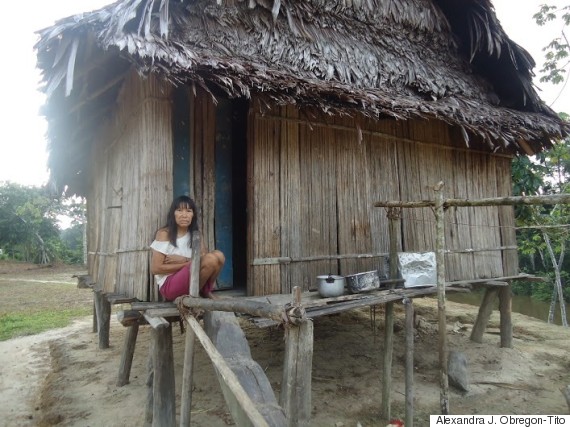 Matses woman sitting at the entrance of a hut typical of the community. They’re built over trees so that families stay dry during the flooding season.

The people of Norman, Oklahoma, by contrast, eat processed foods like canned fruits and vegetables, bread, pre-packaged meals and regularly consume dairy products like milk and cheese. It’s thought that diet can influence gut bacteria diversity, and the stark differences in what the two communities eat may explain why the Matses have more microbial “richness” than the people of Oklahoma.

“By studying the bacteria that was lost during industrialization, we have an opportunity to discover paths to restore those bacteria, assuming that’s a good idea, or at least improve our body’s immune system,” said the study’s lead researcher, Cecil Lewis of the University of Oklahom. “It’s too early to say that Treponema will have role in that restoration, but they are definitely one of the stronger candidates worth exploring.”

To continue his research, Lewis plans to isolate and study the many different strains of Treponema in the guts of hunter-gatherers to learn more about their functions and interactions with each other. He hopes that the research will turn up clues on how to win back some of the beneficial gut bacteria we’ve lost as we’ve modernized our lives.

Lewis also hopes his work will have profound implications for health inequality as well. Studying the gut bacteria of people who are isolated and underrepresented in medical research are also a way to ensure the latest advances in gut flora research reach communities like the Matses.

“Without these insights, the benefit of research may be more applicable to the Westernized, affluent, urban populations, further exacerbating health disparities for the underrepresented,” Lewis wrote in his study. 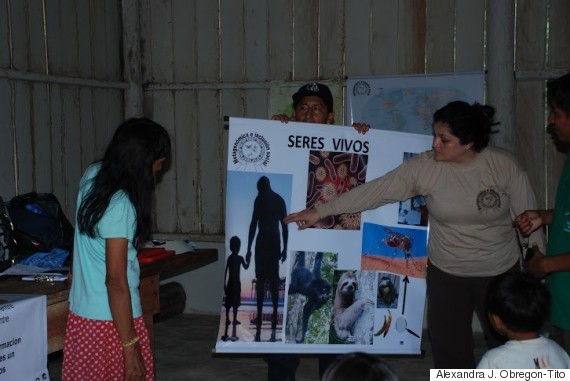 Alexandra Obregon-Tito conducts a public meeting with the Matses, using images to convey concepts about living organisms and parasites. These meetings were conducted at the beginning of the study, to facilitate informed community consent.

To make good on his promises to the Matses, Lewis and team returned to the remote community seven months after initially collecting the samples, to share what they had learned.

Upon learning about the results of the study, according to co-researcher Alexandra Obregon-Tito, Ph.D., members of the Matses community were struck by the fundamental premise of the research — that human beings are teeming with trillions of microorganisms, and that these beings help the body function properly. This was more captivating to them than how the Matses’ gut bacteria stacked up against others around the globe.

“This was the major discovery for them, learning that there are many [microorganisms] and that most of them are not associated with disease,” said Obregon-Tito. “They were intrigued about what are those microorganisms and kept asking, ‘Where do they come from?’ ‘What are they doing in the body?'”

Indeed, those are questions that even the most cutting-edge gut bacteria scientists are still trying to answer to this day. While scientists know that most babies’ guts are first colonized as they pass through the mother’s birth canal and drink breast milk, scientists also theorize that gut bacteria have been with us in a more fundamental way, from the very beginning — shaping our evolution, driving our dietary tastes and preferences and even shaping our moods and thoughts.

Lewis’ research was published Mar. 25 in the journal Nature Communications.