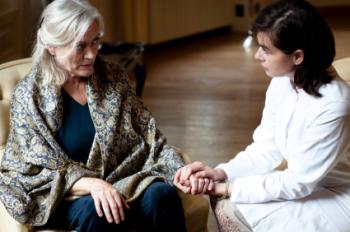 The researchers believe if the findings translate to humans, the new compounds could stop Alzheimer’s disease in its tracks.

Writing in the journal PLOS ONE, researchers from the University of

they identified compounds that block the production of beta-amyloid peptides in mice.

The team suggests if the findings translate to humans, then the most promising of the

developing Alzheimer’s disease long before the signs of dementia appear.

Lead author Nazneen Dewji, an associate adjunct professor in the Department of

“We are blocking the actual production of beta-amyloid in a new way. It’s very

promising because it means that, in principle, we can stop the disease in its

She and her colleagues believe it is likely the new drug would have few side effects because of how it acts specifically on one target – amyloid precursor protein (APP).

Exactly what causes the brain to waste away in Alzheimer’s disease is not clear, but

something to do with it.

The malformed proteins interfere with the effective working of brain cells, resulting

disease, which accounts for up to 80% of all cases of dementia in the US.

The researchers explain that other experimental drugs that tackle amyloid proteins

target the enzymes that cleave beta-amyloid from its larger precursor protein APP.

But those experimental compounds have largely failed in trials, Prof. Dewji says,

“mostly because they are responsible for cleaving other proteins besides APP. Inhibiting

or modifying their activities creates many undesirable effects in the cell.”

the process that cuts it up into the smaller amyloid peptides.

Prof. Dewji – who is also president and CEO of Cenna, the biopharmaceutical company in

La Jolla, CA, where the compounds are being developed – explains:

“Our approach is different, specific and interferes with only the reaction

that produces beta-amyloid, as opposed to drugs that target the enzymes responsible for

its cleavage from APP, which can affect multiple reactions in cells.”

For their study, she and her colleagues carried out experiments in cell culture and

mice engineered to produce large amounts of the human beta-amyloid early in life.

They found that on average, compared with untreated mice, the treated ones

either P8 or another of the candidate compounds, P4.

the production of beta-amyloid very early and specifically. It’s a real chance at a

found a potential cause of Alzheimer’s disease in the immune system. There,

a team from Duke University in Durham, NC, found that in the early stages of Alzheimer’s,

some immune cells that normally protect the brain begin instead to chew up arginine, an