Researchers from the University of Michigan investigating bone formation have made a surprise discovery with the potential to be a breakthrough in the study of prostate cancer. The team has discovered a previously unidentified biomarker that could affect the diagnosis and treatment of the disease. 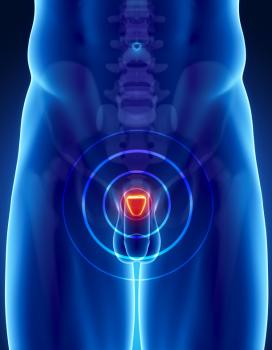 The researchers first discovered the role of Runx2 in bone cells but then went on to find that it was also operative in prostate cancer cells.

The study, published in Oncogene, suggests that a protein called Runx2 whose function is to produce bone may also control the growth of prostate cells. This protein could provide a potential new target for anticancer drugs.

“If this biomarker does indeed control the growth of prostate cells, it’s a new signal that’s not been seen before and could provide a potential new drug target for prostate cancer,” says study author Dr. Renny Franceschi. “It could also be a potential biomarker to discriminate between fast- and slow-growing tumors.”

A biomarker is a characteristic that indicates the medical state of a patient as observed from outside the patient.

“[In the context of prostate cancer] there’s a big interest in trying to find biomarkers to discriminate between aggressive and nonaggressive disease,” explains Dr. Franceschi.

The speed at which prostate cancer grows can vary dramatically. Individuals with slow-growing prostate cancer can die of natural causes before their cancer begins to metastasize, whereas aggressive forms of the disease can spread very quickly indeed.

Discovery made by researchers who usually study bone formation

The study represents a departure for Dr. Franceschi – a professor of dentistry, biological chemistry and biomedical engineering – and his colleagues. Previously, the primary focus of their laboratory has been the study of signals regulating the formation and function of osteoblasts – cells that produce bone.

“We discovered this regulatory mechanism in bone cells, but subsequently found it was also operative in prostate cancer cells,” he explains. “This is the first paper the lab has published on cancer.”

Adding a phosphate group to Runx2, the researchers theorized, changes the protein’s structure and activates specific genes in bone and prostate cancer cells. The process, referred to as phosphorylation, has different results in these different cells, however.

In bone cells, phosphorylation leads to the formation of healthy bone. Unusually, in prostate cancer cells, Runx2 and the newly activated genes promote the growth of tumors and the spreading of cancer. After inhibiting the ability of Runx2 to be phosphorylated in cancer cells, the researchers found that the rate of tumor growth was reduced.

After this initial discovery, the team will now aim to expand on their observations and determine a causal relationship between Runx2 phosphorylation and prostate cancer. In order to do this, they will compare how prostate cancer develops in normal mice and mice lacking the Runx2 protein in their prostates.