A significant number of people aged 65 and over are affected by mild cognitive impairment. New research suggests aerobic exercise can have remarkably beneficial effects on these patients. 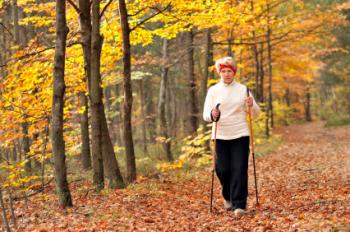 Mild cognitive impairment (MCI) refers to the slightly decreased cognitive abilities in individuals of 65 years of age and over. Such people may experience minor cognitive decline in memory or reasoning, but not to an extent where it interferes significantly with daily activities.

Studies report that anywhere between 5-20 percent of the older population have MCI.

MCI often leads to Alzheimer’s disease (AD). Some studies have shown that 80 percent of patients with MCI have developed AD after 6 years.

Previous research has suggested exercise training may increase the volume of some brain areas and improve memory.

Now, new research confirms it may not only increase brain size, but could also improve cognition in patients with MCI.

Studying the effects of exercise on patients with MCI

Researchers examined 35 adults with MCI in a randomized, controlled trial of physical exercise. The team was led by Laura D. Baker, Ph.D., from Wake Forest School of Medicine (WFSM) in Winston-Salem, NC.

Researchers divided the participants in two groups: one group of 16 adults averaging 63 years of age, and a control group of 19 adults with the mean age of 67.

The former group participated in a range of aerobic activities, including treadmill, stationary bike, and elliptical training. They trained four times per week for 6 months. The control group engaged in stretching exercises at the same rate.

Scientists took magnetic resonance scans of all of the participants’ brains before and after the 6-month period.

The brain images were compared using conventional and biomechanical metrics to measure the changes in brain volume and shape.

The results of the study have been presented today at the annual meeting of the Radiological Society of North America.

At the end of the 6-month period, participants were tested to see the effects of aerobic exercise on cognitive function.

“Even over a short period of time, we saw aerobic exercise lead to a remarkable change in the brain,” says Baker.

Those who took part in the aerobic program had improved significantly more in executive function than the stretching group.

In both the aerobic and the control group, researchers noticed a volume increase in most gray matter areas of the brain, including the temporal lobe, which is responsible for short-term memory.

In the stretching group, researchers noticed a local atrophy within the white matter tracts, also known as connecting fibers. Kim notes that such a deformation is most of the time related to brain volume loss, but not always.

“Directional changes in the brain without local volume changes could be a novel biomarker for neurological disease. It may be a more sensitive marker for the tiny changes that occur in a specific brain region before volumetric changes are detectable on MRI.”

“Any type of exercise can be beneficial,” he adds. “If possible, aerobic activity may create potential benefits for higher cognitive functioning.”

Read about how stronger muscles may lead to a stronger brain.