Sept. 13, 2016 — First came Zika-infected mosquitoes. Then came the planes, misting a powerful insecticide and nerve agent from the tips of their wings.

Miami residents aren’t sure which is scarier.

“I know pregnant women who are out of town. They’re gone. I also know people who have left or are leaving because of the spraying,” says Scott Diffenderfer, a real estate agent in Miami Beach. 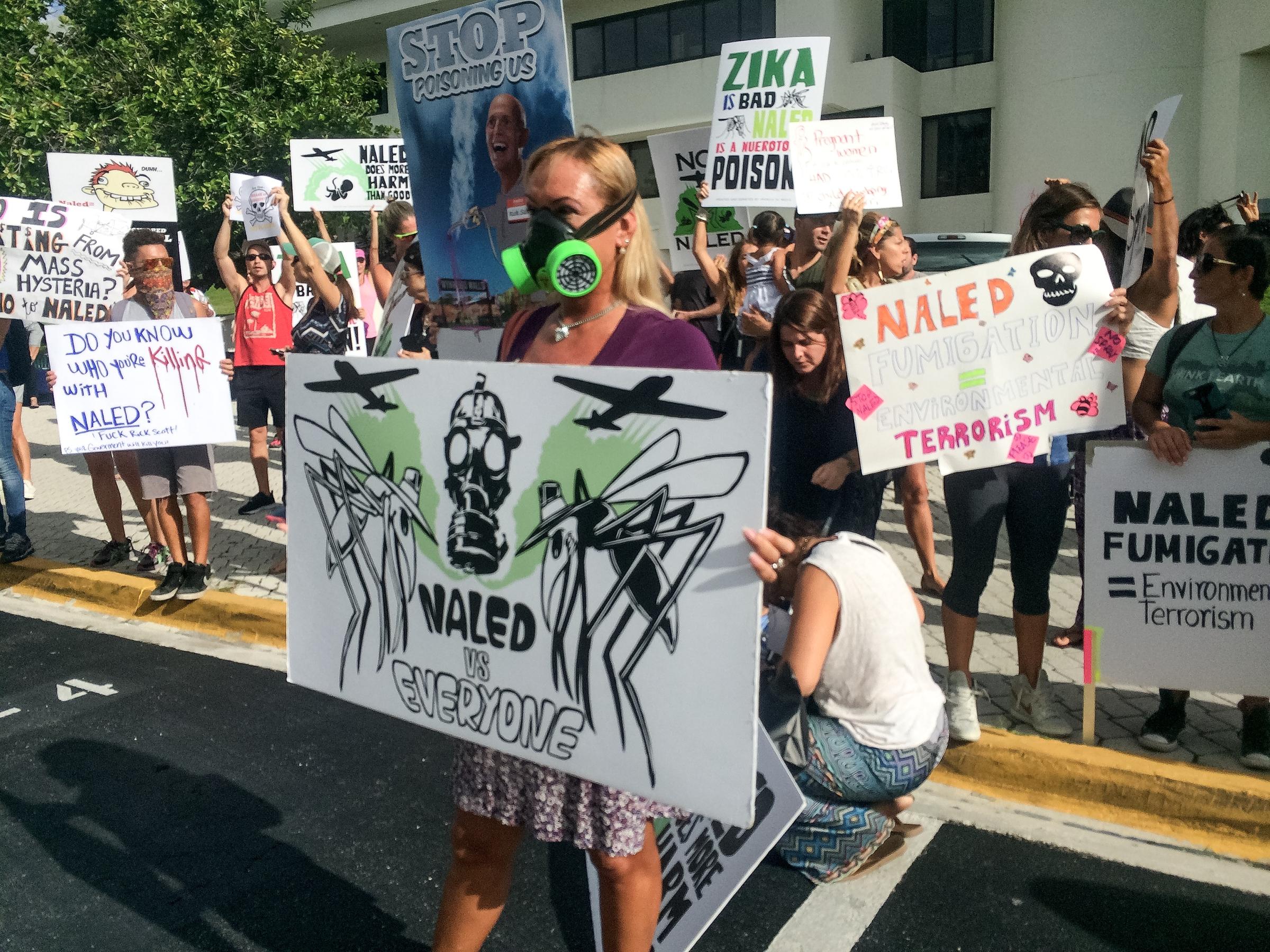 “Most people here believe that the spray is worse than the disease.”

The insecticide is called naled, or Dibrom, and it’s the same chemical that was recently blamed for the deaths of millions of bees in South Carolina.

In the tightly knit hamlet of Miami Beach, where local transmission of Zika has been confirmed in one area, many residents are furious that authorities reversed a decision not to spray there for fear that high winds and high-rise buildings might make the spraying ineffective. They are worried about the health effects of the pesticide — a powerful nerve-blocking agent in the same chemical family as sarin gas — and collateral damage to bees, birds, and fish

So far, Miami-Dade County has sprayed twice there by air and plans to spray twice more in the coming weeks. Miami Beach is the only place in the U.S. where mosquitoes caught in traps have tested positive for the Zika virus.

“In Miami Beach where they sprayed it, they killed the koi in people’s ponds, they killed the migrating swallows, pigeons died, and who knows what else. People have been collecting the dead fish and dead birds from the naled spray on Miami Beach,” says Philip Stoddard, PhD, a professor of biology at Florida International University. He is also the mayor of the city of South Miami.

The CDC says naled is one of the few EPA-registered insecticides that still kills Aedes mosquitoes — the kind that are spreading the Zika virus. Testing shows that these mosquitoes have become resistant to many other kinds of insecticides, which are typically applied with backpack foggers or from the backs of trucks.

There’s no question that naled, an organophosphate, is powerful. But health officials say it’s safe for humans when used correctly. On its website, the EPA says that when it is “applied according to label instructions, naled can be used for public health mosquito control programs without posing risks to people.”

About 10 years ago, the EPA took steps to limit the use of naled. It can no longer be used around homes by residents or professional applicators. Some pet companies also agreed to stop using naled and similar insecticides in flea collars after they poisoned children and pets. It can still be used for mosquito control, however. About 1 million pounds of it are applied in the U.S. each year.

Naled is almost always applied by large sprayers in planes because the formula easily gunks up the nozzles of handheld equipment, says Joe Conlon, a spokesman for the American Mosquito Control Association.

“While it’s the most toxic, drop for drop,” he says, “there’s at least a 100-fold safety factor built in before human health becomes a consideration. By that I mean they’d have to put out 100 times the amount that they’re legally authorized to do before human health becomes a consideration. There’s a wide margin of safety.” What’s more, he says: “If you’ve got a widespread outbreak, aerial spraying is the only way to go.”

Conlon says people who apply naled are required to complete training before they use it. He said most mosquito control programs do a great job minimizing the risks to other insects and animals, and to people.

“We don’t use it willy-nilly. We try to only use it according to the label specifications. Accidents do happen, though,” he says.

Some places, like Dorchester County, SC, where the bees were killed recently, are new to using naled.

Scott Gaskins, county mosquito abatement supervisor, says he was never given money before to spray from the air. “We’re a big county. We have two trucks covering the entire county,” he says. “There are just a lot of places my trucks can’t get to.”

This year, with Zika on everyone’s minds, county officials finally approved the funds, though mosquitoes are not known to be transmitting any disease there. Gaskins said he sprayed because he was getting complaints that people were being bitten a lot.

Gaskins says they tried to call area beekeepers before the spray but didn’t realize they didn’t have a complete list. An estimated 2.5 million bees at Flowertown Bee Farm died soon after the early morning spray, which occurred from 6:45 to 7:50 a.m.

There’s another argument against using naled. There’s little evidence that it works on Aedes mosquitoes, the kind that are known to spread Zika. Aedes tend to be most active at dusk and dawn. They don’t have a lot of stamina for flying, and since they prefer human blood, they like to stick close to or even inside houses. Critics of the spraying strategy say there’s no evidence that aerial spraying will kill this type of mosquito, and there are no published studies to show that it works. In order for naled to work, it has to catch mosquitoes in mid-flight.

“We cannot spray our way out of Zika,” says Umair A. Shah, MD, the executive director of the Harris County Public Health Department in Houston.

“When you have a daytime mosquito that’s largely near homes, in homes, close to the ground, and you’re spraying from a far enough distance from the street or from the air, you’re not going to be able to get them,” he says.

Harris County is the third most populous county in the U.S. It’s larger than Rhode Island. Though there hasn’t been any locally transmitted Zika there, a baby was born there with microcephaly to a mother who caught the virus while traveling. In August, another traveler died of Zika after returning to Harris County. The county also knows Aedes mosquitoes are there. In years past, those mosquitoes have brought dengue and chikungunya infections to residents.

Shah says they have no plans to use aerial spraying to protect people from these kinds of mosquitoes.

“We feel it’s not as effective. It’s not an optimal use of resources,” he says.

Puerto Rico has also rejected the idea of spraying naled. In July, Gov. Alejandro Garcia Padilla ignored guidance from the CDC and said he would spray a bacteria that kills mosquito larvae, but would not authorize the aerial spraying of the more potent insecticide.

In 2012, the European Commission banned the use of naled in the European Union. The commission’s decision cites “potential and unacceptable risk” to humans and the environment.

But Amvac, naled’s manufacturer, says their product wasn’t removed from the European market for safety reasons, but because the company stopped doing required studies. They say most countries don’t do aerial spraying in Europe, and there wasn’t much of a market for their product there. It wasn’t cost effective to keep up with the regulatory requirements.

“We basically allowed the registration to lapse,” says Kelly Willmott, a company representative.

In Miami-Dade County, officials say they’ve finished aerial sprays over the Wynwood area. They’ve been spraying naled in the county for more than 40 years, though this is the first time aerial spraying has been used in such densely populated urban areas.

CDC officials say they are studying the spraying very carefully to see if it works.

Pestorius says officials add a dye to the spray and place special rods on the ground near the areas where Aedes mosquitoes have been captured in traps. When the sprays are finished, they collect the rods and place them in a machine that can detect the dye in the spray. That’s to make sure the spray has hit the right areas.

Conlon and other mosquito control experts says naled also breaks down very quickly and doesn’t persist in the environment, which further limits its potential to cause harm.

Biologists say that statement is misleading, however.

“If they are saying that, they aren’t being candid with you. It doesn’t go away,” says Stoddard.

Instead, he says, naled breaks down into another organophosphate chemical called dichlorvos.

“Dichlorvos does persist. It just sits there covering all the surfaces with an oily residue,” Stoddard says.

The residue is what Evo Love, a Miami artist who lives about 2 miles outside Wynwood, first noticed. She was working in her yard barefoot, pulling down dead palm fronds, when she started feeling strange. She noticed a residue on outside surfaces including her door handle and the fronds. Then, she says, her tongue started to feel thick and stiff and began twitching.

“The best way I can describe it was you know how the corner of your eye will sometimes twitch, it was like that,” Love says. It went on for 4 hours. Love says she isn’t a complainer but started to get scared because it felt like she her throat could close up. Finally, she broke down and told her husband, who told her that the county had been spraying for mosquitoes in the area.

“I’m not a doctor and I’m not a scientist. I am concerned about Zika and I’m equally concerned about naled,” she says. “I stand my ground that the powers that be should not be spraying this on us at all.”

After her experience, she spent hours reading on the Internet and trying to figure out what happened. She’s printed fliers that she’s distributed through the neighborhood to warn people.

After telling her story to a local radio station, other residents in the area have sent her pictures of dead fish and dead birds — casualties, they believe, of the naled.

By closely studying state laws, Stoddard says he was able to keep naled spraying out of South Miami, one of 35 municipalities that make up the Miami metropolitan area. But if Zika was found to be spreading there, he thinks he wouldn’t have the authority to block it.

“This stuff is not benign. It was developed as a wartime nerve poison. Then it becomes a matter of dose. But people vary in their sensitivity,” Stoddard says.

He says some people carry a genetic change — common among people with Iranian Jewish ancestry — for a condition called pseudocholinesterase deficiency, which would make them more vulnerable to the spray’s effects.

While Stoddard takes issue with the decision to spray, he says people who don’t think Zika is dangerous have it wrong, too.

“Some people keep saying, ‘Well, Zika’s not that bad.’ Zika is that bad,” he says.

Stoddard points out that studies have shown that the Zika virus can kill the brain’s stem cells, even in adult mice.

“That should be a concern for everybody. We didn’t use to think that people grew new brain cells as adults, but it turns out that we do,” he says. “It could be that an active Zika infection dooms you to early senility. We don’t know yet. It’s too soon to know.”

Stoddard says what people need now is some good evidence that the spraying is working.

He’s asked for the data. He’s still waiting on it.

“Commission Decision,” Official Journal of the European Union, May 11, 2012.