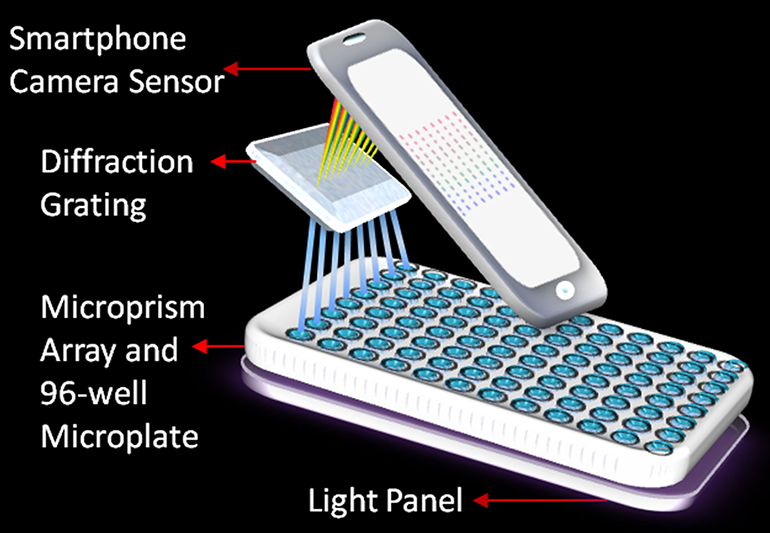 Point-of-care diagnostics is a growing field due to the increasing need for real-time analysis of patient samples in remote locations. These diagnostic tools need to be reliable, efficient and cheap (especially in developing countries). Routine tests to measure biomarkers involve a method called Enzyme-Linked ImmunoSorbent Assay (ELISA) where the relevant protein binds to specific markers and display different intensities of color based on the amount of protein. This method is well established, but the laboratory instrument used to read and interpret the results is often expensive, heavy and large. 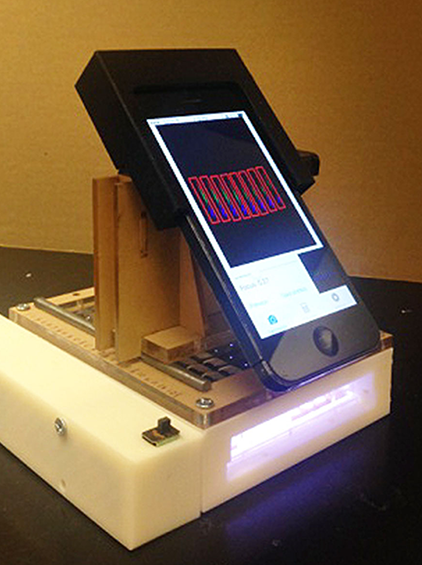 To overcome this, researchers from the University of Washington have developed a cheap, lightweight optical biosensor that can be attached to a smartphone for accurately measuring the amount of protein in samples. While such sensors have been developed before, the paper describes the first multichannel sensor, which allows up to eight samples to be processed at once. This is important in hospitals processing large numbers of patients with no on-site laboratories, and also for doctors in remote locations.

The paper, published in Biosensors and Bioelectronics (to appear in their January 2017 issue), describes a microprism array that can enlarge the field of view of a regular smartphone camera, and can also present uniform light distribution that makes the measurements more accurate. The U of Washington team measured the levels of a protein called IL6, a common biomarker for several cancers, and reported that their measurements were comparable to measurements made by standard laboratory instruments. These tests have only been done on laboratory samples so far, but the authors plan to test the device with real-world samples next.

One of the interesting additions to the device was the use of 3D printed accessories in order to fit the sensor to the phone. The authors also developed an iPhone app in order to process the measurements. While it may take a few years for these sensors to be used reliably and routinely in a clinical setting, studies like these are small steps towards improved point-of-care diagnostics.

Link to paper in Biosensors and Bioelectronics: A multichannel smartphone optical biosensor for high-throughput point-of-care diagnostics