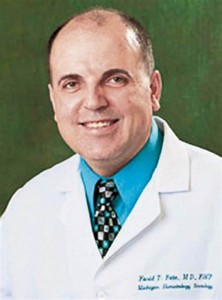 A disgraced cancer doctor who admits he gave patients unnecessary treatments to make millions will find out Friday morning whether he spends the rest of his life in prison.

Anything less than that will be a disappointment to Monica Flagg — who says she was given a bogus diagnosis and expensive treatments by Dr. Farid Fata before relief came, in a strange twist, in the form of a broken leg.

“When I saw Fata walk in the door, I cried,” Flagg, 53, said of coming face-to-face with the oncologist in Detroit Federal Court for this week’s pre-sentencing hearing. “[It] was just horrible to see him again.”

In 2012, Flagg’s primary care doctor noticed an abnormality in her blood work and referred her for a followup with Fata, who had built an empire of upscale cancer clinics in Detroit suburbs in less than a decade.

Fata told her she had multiple myeloma and, according to prosecutors, lied about her medical tests to make it appear that she needed aggressive treatment.

She had three bone biopsies and was bombarded with immune boosters before being given one round of a chemotherapy drug, Velcade, in July 2013, court papers say.

“The day was horrible. It was a lot of stress,” she said of that first treatment.

She came home from the clinic, went upstairs to unpack a suitcase, and tripped and fell.

“I heard both my bones crack. I knew that my leg had been broken in half. I screamed for help,” Flagg told NBC News.

The painful injury turned out to be a blessing in disguise.

Flagg was taken to Crittenton Hospital Medical Center in Rochester Hills, Michigan, where Fata — who prosecutors say was notorious for treating all his patients personally and keeping other medical professionals away — normally would have overseen her care.

But Fata was away from Michigan and his sprawling mansion, on a rare vacation to his native Lebanon. The doctor on duty was one of his underlings, Soe Maunglay, who told NBC News he was already harboring suspicions about his boss’ unconventional treatments.

At Crittenton, a pre-operative bone marrow biopsy did not show any indication of cancer, according to the prosecution memo. And after Maunglay reviewed Flagg’s file, he asked her a series of questions that made alarm bells go off in her head.

“This doctor was in my hospital room today and even though he didn’t say it, I don’t think he thinks I have cancer,” Flagg told her husband, Steve, at the time.

“He came in, asked the lady who was visiting me to leave and he told me, ‘You don’t have cancer. You are 51 years old. You’re healthy. Don’t ever go back to Dr. Fata. Find a new doctor,'” Flagg recalled.

“I was overcome with joy,” she added. “It was one of the happiest days of my life.”

Her lawyer, Brian McKeen, said the broken leg likely saved Flagg from months or even years of more needless treatments.

“Had she not broken her leg, God only knows what would have happened,” McKeen said. “But Monica might very well not have been with us any longer because people can get very sick from these toxic levels of chemotherapy that he was using and was going to be using.”

Weeks after Flagg broke her leg, Fata was arrested by the FBI. Federal authorities were alerted to the situation through a whistle-blower suit filed by the doctor’s office manager, George Karadsheh, who said he started digging as soon as he heard disturbing things about misdiagnosis and overtreatment.

“I started to put the puzzle pieces together,” Karadsheh said.

In court papers, prosecutors say Fata victimized more than 500 patients — telling some they had cancer when they did not, giving too much or improper treatment to others who did have cancer, and continuing to give chemotherapy to terminal patients who didn’t need it any longer.

Some two dozen of them took the stand in court this week to testify about how Fata had stolen their health, money and trust.

Prosecutors want the judge to give him 175 years in prison — an effective life sentence — painting his businesses as a “criminal enterprise” in which patients were used as cash cows.

Fata’s lawyers argued in court on Thursday that the feds had based their sentencing recommendation on the millions that the doctor billed the government, not the lower amount that Medicare actually paid out, which would justify a more lenient sentence.

Defense attorneys have declined to comment outside court on the prosecution’s allegations.

Flagg and other victims have filed a civil suit, and her lawyer said that litigation is an opportunity to answer some troubling questions about the case, including why Fata’s practices did not come to light sooner.

“There seem to be red flags that should have triggered a review,” McKeen said. “He is using regimens of chemotherapy that are far in excess of what other oncologists use. And so whistles should be blowing.”

Flagg, who says she is still dealing with the after-effects of her treatment, thinks patients across the country can learn from her ordeal.

“I think certainly when it is a matter of life of death, [get a ] second opinion every time,” she said. “Don’t hesitate.”