That’s how much money Americans spent on supplements and similar nutrition products in 2013. About 15 percent of adults have sought a quick fix from a weight-loss supplement at one time or another, says the Journal of the American Dietetic Association. But are we wasting our money—or worse, harming our health? A 2015 New England Journal of Medicine study found that more than seven out of every 10 supplement-related ER visits were linked to weight-loss or energy products. So we turned to Erin Thole, RD, registered dietitian and spokesperson for the Iowa Academy of Nutrition and Dietetics in Des Moines, Iowa, for the skinny about some of the most common supplements. 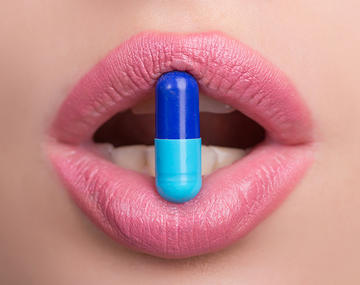 The appeal: This medicinal plant, grown in southern Africa, is scientifically known as Hoodia gordonii. It has been touted to decrease appetite through a chemical released that targets the fullness area of the brain.
The reality: “It isn’t surprising that many individuals fall victim to fad diets and weight-loss supplements, like hoodia, as a result of our society’s focus on weight. The bottom line is that if a product or diet sounds like a quick fix that is too good to be true, it probably is,” Thole warns. Plus, there are plenty of counterfeit versions of hoodia sold, especially online. Hoodia can cause headaches, dizziness, nausea, vomiting, and possible increases in heart rate, she adds.

The appeal: Derived from raspberries (obv), this chemical has been proven, in test tube trials, to speed up metabolism to burn fat faster.
The reality: “There’s not nearly enough data to prove that this is worth your money,” Thole says. No human studies have researched whether this is effective—or even safe for—people. “When it comes down to it, there are no foods or pills that can magically burn human fat.”

The appeal: Also known as ma huang, this herbal stimulant is derived from an evergreen shrub. It was used 5,000 years ago in China and India to treat conditions like congestion and colds, according to the National Institutes of Health. More recently, people have turned to ephedra to help cut weight while boosting energy and physical performance.
The reality: As of 2004, the Food and Drug Administration banned ephedra “due to possible adverse effects, including mood changes, hypertension, irregular heart rate, and even stroke, seizure, and heart attack,” Thole warns. Especially steer clear of mixing ephedra with caffeine or other stimulants.

The appeal: Some have turned to this herbal option as an ephedra substitute after ephedra was banned.
The reality: Different name; just as dangerous, Thole says. “It has chemical properties and actions that resemble ephedra, including hypertension, anxiety, stroke, heart attack, and irregular heartbeat.”

The appeal: Derived from a tropical fruit, GCE has been sold as a tool to “block the body’s ability to make fat while decreasing appetite and increasing the body’s ability to use glucose for energy,” Thole says.
The reality: In 2009, the FDA warned consumers to cease and desist use of GCE due to potential liver problems and troublesome side effects like dizziness, dry mouth, headache, and upset stomach. “Currently, studies are mixed on its benefit and don’t show significant weight loss with GCE, Thole says. “Certainly avoid this if you are taking other medications, as negative drug interactions may occur. Many people have some sort of pre-existing condition, which is another reason why I generally do not recommend weight-loss supplements.”

The appeal: “Alli is a version of Orlistat that claims to decrease the absorption of dietary fat in your intestines,” Thole says.
The reality: While the FDA has approved Orlistat for use by the general population, bathroom breaks could certainly get more complicated. Common side effects: Loose stools and difficult-to-control bowel movements. And more rarely (and seriously), Orlistat may lead to liver damage. Worth noting: “For nonprescription meds [Orlistat is available over the counter], the drug company must provide the FDA with results of clinical trials showing the safety and effectiveness of the drug,” Thole says. “Nonetheless, the claims that help promote the drug—say, a certain amount of lost pounds or a percentage metabolism boost—are not subject to FDA regulations.”

The appeal: Caffeine, a stimulant, has been glorified as a potential appetite-squasher. It has also been linked to a slight boost in calorie-burning during digestion and increased workout endurance.
The reality: It’s most likely not going to be detrimental to your health, but taking more than you’re used to, whether via coffee or caffeine pills, could cause jittery feelings, sleep troubles, upset stomach, and more. (We’ve all seen what happened when Jessie Spano popped too many caffeine pills to stay up to study for an exam.) Plus, any proven weight benefits have been only short term, according to the Mayo Clinic.