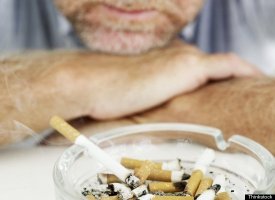 At night, you can’t sleep. In the morning, you can’t wake up. Sound familiar? Get back on track with these three myths and facts about sleep.

Myth #1: Getting up at night for, say, 15 minutes just means I lose 15 minutes of sleep. Unfortunately, when life wakes you in the middle of the night, you lose way more than just those minutes out of bed. Waking to change your pajamas after a hot flash, answer the phone if you’re on call, or of course, comfort a crying baby is harder on us than we ever thought.

I’m surprised it took until 2014 to officially research this, but a first-of-its kind study in the journal Sleep Medicine looked at the effects of sleep interruption over two nights. The first night, all the study participants slept for eight hours. Then researchers then measured their mood and ability to pay attention. Good so far.

A few nights later, the participants were split into two groups: half slept for only four hours, while the other half slept for eight hours but got woken up four times for 10 to 15 minutes at a stretch. So technically, they spent at least seven hours asleep — three hours longer than the four-hour group — just interspersed with awakenings. Then everyone’s mood and attention was measured again.

Anyone who’s ever had a newborn or been on call for work knows the results: the mood and attention of folks with interrupted sleep were just as bad as those who slept for only four hours. Both groups felt depressed, irritable, and had a hard time getting going. Plus, performance on the attention task got worse the longer they kept at it. Indeed, whoever coined the term “sleep like a baby” clearly never had one.

Myth #2: My brain holds my internal clock. Yes, the master clock, technically called the suprachiasmatic nucleus, or SCN, is in your brain. But almost all your organs, plus your fat and skeletal muscle, follow some sort of daily rhythm as well. Your gut, liver, and kidneys in particular have strong rhythms.

That’s why you feel so lousy when you have jet lag, and that’s why you often wake up groggy or feeling thrown off when you sleep in on the weekend: your whole body is affected.

And over the long term, throwing off your body clocks through overnight shift work, frequent jet lag, or just wacky sleep habits can put you at risk for some serious diseases, including breast cancer and colon cancer.

Circadian disruption is also thought to be a final push that sends some of those merely at risk over the edge. For example, only 30 percent of alcoholics develop liver disease. Why? Well, a 2013 study found that circadian disorganization, common in shift workers, increases “permeability of the intestinal epithelial barrier,” or in other words, a leaky gut. In the context of what the researchers called “injurious agents,” i.e., booze, a leaky gut puts folks at higher risk for liver inflammation and disease. They concluded that while there are many factors that determine whether someone with alcohol addiction develops liver disease, circadian disruption may be a swizzle stick that breaks the camel’s back.

Myth #3: If I can’t sleep, I should just wait it out… sleep will come. On the contrary, if you know you’ll be staring at the ceiling for awhile, get up. Yes, your bed is cozy and warm, but here’s why. Much like you probably associate biting into a lemon with puckered lips and Pavlov’s dog associated the bell with food, thereby salivating, you want to associate your bed with one thing: sleep (well okay, two things: I’ll let you guess the other).

When you lie in bed for more than about 15 or 20 minutes without sleeping, you start to associate your bed with wakefulness. And when you watch TV or fool around on Pinterest in bed when you can’t sleep, those too become associations with bed.

With time, bed could mean sleep, or it could also mean CSI, preschool science project pinboards, or planning your day in your head. Yes, even thinking and worrying qualify as activities you don’t want to do in bed.

So what to do? You can still do all these things, just don’t do them in bed. Get them done before you head to bed, and if you can’t sleep after 15 to 20 minutes, get up and do something non-stimulating like reading (on paper, not a tablet!) until you feel sleepy. Then try again. If you still can’t sleep, rinse and repeat: get up again to avoid associating the bed with anything but sleep and sex.

This is what behavioral psychologists call stimulus control and it’s the most effective way to combat chronic insomnia. It may take a week or two, but it’s been shown to break the bad habits that maintain insomnia. Before you know it, you’ll be so good at sleeping you’ll do it with your eyes closed!

For more, check out the Savvy Psychologist podcast, one of iTunes Best of 2014. Listen now or keep in touch on Facebook.

The Link Between Traffic Noise And Weight Gain

Talking To A Therapist Could Be The Secret To Sleeping Better

9 Tricks To Learn From Super Sleepers

Sleep Could Help Stave Off Alzheimer’s, According To New Study