In the 2016 World Immunization Week held during April 24 to 30, the WHO highlighted the recent accomplishments of EPI coverage areas, and an overview of each country to “bridge the immunity gap” and achieve the 2020 global vaccination target may further the measures taken. 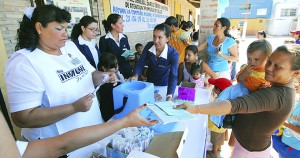 “Last year’s immunization program makes some significant gains made in the fight against polio, rubella, and maternal and neonatal tetanus in.” WHO Director-General Dr Margaret Chan said. “But these benefits exist in isolation, in a national anti-polio get tetanus in the three countries, the elimination of rubella in the elimination of a geographic area. The challenge now is to make such gains become the norm.”

EPI can annually 200-3000000 cases of deaths was reversed. However, if global vaccination coverage is improved, then another 1.5 million cases of deaths can be avoided. Now, an estimated 18.7 million infants in the world (accounting for almost one-fifth of children health) is still not routine immunization against diphtheria, pertussis and tetanus and other preventable diseases.

In 2012, the World Health Assembly endorsed the Global Vaccine Action Plan, is committed to ensuring access to critical immunization program. Despite last year in some regions and countries have made achievements in terms of vaccination coverage, the global vaccine is still not on track to meet the target.

Last year made some breakthrough.

India not only Cambodia, Madagascar, Mauritania and an elimination of maternal and neonatal tetanus, the country also allows DPT vaccine coverage is improved, reaching 83%.

Although Ebola challenges in routine EPI coverage, etc., but Nigeria was kicked removed from the list of polio-endemic countries in Africa region toward a polio-free certification a step. Recently in 2012, it had accounted for more than half of all the world’s polio cases. Now only two countries (Afghanistan and Pakistan) remain polio epidemic.

First Region of the Americas eliminated rubella. This is a women acquired their infection during pregnancy can cause a variety of birth defects and fetal death when infectious viral disease. In addition, we can use affordable group A meningococcal conjugate vaccine five years, more than 230 million people get immunized, which makes extending from Senegal to Ethiopia African “meningitis belt” A fatal meningococcal disease under control and almost eliminated.

In the near future, dengue, Ebola and malaria vaccines new major changes may occur. For example, through the “ring vaccination around” strategy, is to Ebola infected people there who have contacts and contacts in all of Ebola vaccine inoculation.

Polio vaccination program is under new important step towards a polio-free world has taken this month, 155 countries have been deactivated in type 2 oral polio vaccine.

“Despite some achievements in global immunization program, but in the past few years, global vaccination coverage stagnated,” WHO’s family, women and children’s health, Assistant Director-General and Vice-Chairman of the Board Global Alliance for Vaccines and Immunization Flavia Bustreo Doctor said. “Now every day still miss a lot of contact with children do not get the opportunity to vaccination and immunization gaps to bridge.”

To improve vaccination coverage, WHO called on countries to find children to be missed more conventional service systems, particularly those living in the vaccination rate is less than 80%, regional and local, or by living in conflict or emergencies children in the affected countries.

Children do not get vaccinated in more than 60 per cent live in 10 countries: the Democratic Republic of Congo, Ethiopia, India, Indonesia, Iraq, Nigeria, Pakistan, the Philippines, Uganda and South Africa.

Similarly, when not get vaccinated or not fully vaccinated children or adults, for any reason to the health institutions, health care workers should check their vaccination record, and get all the missing vaccine replant.

“These children are not what we think of ‘inaccessible’ or difficult to obtain population and services,” said Dr WHO Department of Immunization, Vaccines and Biologicals Division Okwo-Bele. “Children have access to health facilities is very easy to benefit from improving vaccination coverage aspect.”

Many successful due to the strengthening of all levels (national, regional and global levels) leadership and accountability achieved last year.

“When countries and partners to strengthen and establish clear accountability, measure results and take corrective action if inconclusive, it is possible to bridge the gap immunization,” said Dr. Okwo-Bele.

Quality and use of data;

In the promotion and use of quality data, the World Health Assembly last year adopted a resolution concerning the pricing of the vaccine, which requires States to provide vaccine prices to WHO. WHO database there are currently 42 countries from nearly 50 different vaccines vaccine 1600 record price. These records also come from international buyers WHO Region of the Americas to purchase existing platforms, and UNICEF, making it the largest international vaccine price database.

Because the vaccine price to pay countries accounted for a large part of the immunization program budget, and the price of new vaccines higher than traditional vaccines, therefore, costs for the introduction of new vaccines countries formed a major obstacle.