Recently, at the 2016 International Conference on Autism Research held in Baltimore, researchers announced a latest findings: Despite the lack of folic acid in pregnant women is not conducive to the development of the child; but too much folic acid can also cause damage, especially high levels of folic acid pregnant women, the higher the risk they bear children suffering from autism in adulthood. 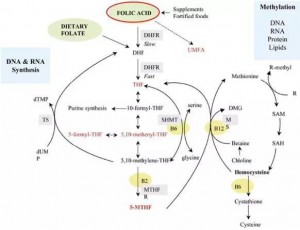 Folate (folic acid), also known as vitamin B9, is a water soluble vitamin. For decades, pregnant women and women who are ready to conceive are advised to take folic acid in advance, in order to reduce the risk of certain birth defects in newborns, especially to some extent prevent the baby’s brain and spine and other major birth defects.

In the early 1990s, US health officials began to recommend that all pregnant women should be prepared to take 400 micrograms (0.4 milligrams) of folic acid every day for the prevention of neural tube defects. This measure is considered to be in the past half-century a great public health story.

But a new study shows that pregnant women or excessive vitamin levels so that the child in the adult higher risk of autism. Although there are some studies in contrast, showed adequate levels of folic acid can reduce the risk of autism. Professor Daniele Fallin from Johns Hopkins University, believes that this does not mean that a person ceases to add. But it raises an interesting question, should continue to explore the need for folic acid supplementation.

May 11, held in Baltimore Autism Research meeting: Columbia University professor of psychiatry and epidemiology Ezra Susser think that are found to be reasonable, other researchers suspect that too much folic acid can cause some problems.

In this study, the researchers tracked born at Boston University Medical Center from 1998 to 2013 of 1391 children, about 100 people were later diagnosed with an autistic spectrum disorder; researchers to look back the children studied blood levels of folate and vitamin B12 in the mother’s womb. They found that: the mother of 16 children was very high levels of folic acid in the mother of 15 children was at very high levels of vitamin B12. However, because these are the very small number of cases, there is still no majority of children suffering from autism.

However, some experts have questioned whether the new study, the main findings are only based on one hospital, a small part of the data of the family. In addition, vitamin analysis is based on the mother’s blood at the time of the measures passed, but did not reveal evidence of its impact on the female body in early fetal brain development. And it was felt the moment no reason to change the current public health recommendations. The researchers said: They do not know why some women such a high level in the blood, which is taking too many supplements or eat fortified foods too much about.

2) Congress of Obstetrics and Gynecology recommends that pregnant women get at least 600 micrograms a day to get all the folic acid.

3) excessive consumption of folic acid or vitamin B12 may be harmful to fetal development, but more research is needed to confirm.