MRSA has become one of the deadliest bacteria of modern times. The cause of more than 80,000 severe infections in the US every year, the “superbug” has evolved to develop resistance to many antibiotics that once killed it. But researchers from the University of Nottingham in the UK say they may have uncovered a new treatment for MRSA: a 1,000-year-old remedy for eye infections taken from a manuscript found in the British Library. 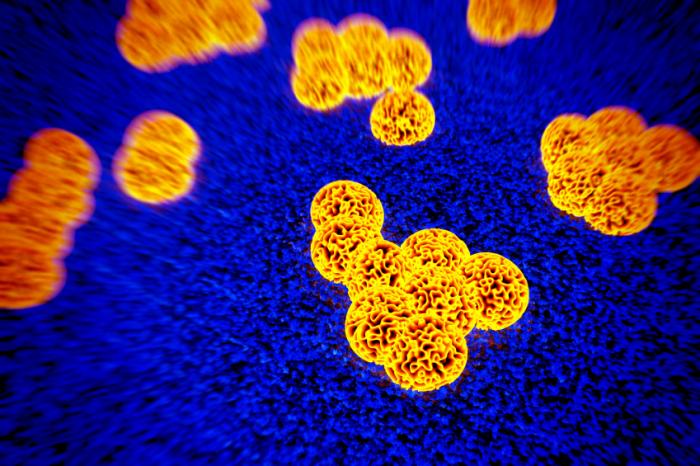 The ancient potion – made of garlic, onion or leek, wine and cow bile – proved effective against the superbug MRSA.

Dr. Christina Lee, associate professor in Viking studies and a member of the Institute for Medieval Research at the University of Nottingham, and colleagues say the remedy killed up to 90% of MRSA (methicillin-resistant Staphylococcus aureus) in vivo.

What is more, studies in mouse models of MRSA conducted by researchers from Texas Tech University in Lubbock found the ancient potion presented “astonishing” results against the superbug.

The researchers are due to present their findings at the Annual Conference of the Society for General Microbiology in Birmingham, UK.

MRSA is a type of Staphylococcus, or “staph,” bacteria that can be spread through skin-to-skin contact. It can cause skin infections and – particularly in health care settings – bloodstream infections, pneumonia and surgical site infections.

The Centers for Disease Control and Prevention (CDC) estimate that in 2011, MRSA was the cause of 80,461 invasive infections and was related to 11,285 deaths in the US. Most MRSA infections occur in health care settings.

MRSA infections are becoming harder to treat. Many antibiotics that were once effective against the bacteria – including methicillin, oxacillin and nafcillin – no longer work. As a result, researchers across the globe are trying to find new ways to kill the superbug.

The manuscript was found in Bald’s Leechbook, which is believed to be one of the earliest ever medical textbooks. The book contains an array of Anglo-Saxon remedies for a number infections, and a potion for an eye infection caught Dr. Lee’s attention.

“Medieval leech books and herbaria contain many remedies designed to treat what are clearly bacterial infections,” says Dr. Lee. “Given that these remedies were developed well before the modern understanding of germ theory, this poses two questions: How systematic was the development of these remedies? And how effective were these remedies against the likely causative species of bacteria?”

“Answering these questions will greatly improve our understanding of medieval scholarship and medical empiricism,” she continues, “and may reveal new ways of treating serious bacterial infections that continue to cause illness and death.”

Dr. Lee translated the recipe for the ancient eye infection potion. The recipe requires garlic, onion or leek, wine and bile from a cow’s stomach, called oxgall. The potion must be brewed in a brass vessel, strained for purification and left for 9 days before being applied to the infected site.

Following the recipe’s strict instructions, Dr. Lee and her colleagues made four batches of the potion using fresh ingredients for each batch.

Researchers ‘blown away’ by the potion’s effectiveness against S. aureus

The team created artificial wounds infected with S. aureus by growing the bacteria in collagen. They then exposed the wounds to each potion ingredient individually or the full potion.

Applying each separate potion ingredient to the wounds appeared to have no effect against S. aureus. When the full potion was applied, however, they found it killed almost all of the bacteria, with only around one bacterial cell in every 1,000 surviving.

Next, the researchers diluted the potion and applied it to the infected wounds to determine how much of it would be needed to treat a real infection.

They found that diluting the potion to the extent that it is unable to kill S. aureus interrupts communication between bacterial cells. Dr. Lee and colleagues say this is an important discovery because bacterial cells have to communicate with each other in order to cause tissue damage, and many scientists believe halting such behavior could treat infection.

Study leader Dr. Freya Harrison, also of the University of Nottingham, says the team was surprised by the findings:

“We thought that Bald’s eyesalve might show a small amount of antibiotic activity, because each of the ingredients has been shown by other researchers to have some effect on bacteria in the lab – copper and bile salts can kill bacteria, and the garlic family of plants make chemicals that interfere with the bacteria’s ability to damage infected tissues. But we were absolutely blown away by just how effective the combination of ingredients was.”

Dr. Harrison says the potion even proved effective in harsher conditions, killing S. aureus in “biofilms” created from extended growth of artificial infections. Biofilms occur when each bacterial cell clumps together, creating a sticky coating that can stop antibiotics from reaching them.

“When we found that [the potion] could actually disrupt and kill cells in S. aureus biofilms, I was genuinely amazed,” says study co-author Dr. Steve Diggle.

“Biofilms are naturally antibiotic resistant and difficult to treat so this was a great result. The fact that it works on an organism that it was apparently designed to treat [an infection of a stye in the eye] suggests that people were doing carefully planned experiments long before the scientific method was developed.”

The researchers explain their findings further in the video below:

Effectiveness of ancient remedy on par with previously used antibiotics

The ancient potion was also tested on mice with MRSA-infected skin wounds by Dr. Kendra Rumbaugh from Texas Tech University, and she found it was highly effective against the superbug.

“We know that MRSA infected wounds are exceptionally difficult to treat in people and in mouse models,” says Dr. Rumbaugh. “We have not tested a single antibiotic or experimental therapeutic that is completely effective; however, this ‘ancient remedy’ performed as good if not better than the conventional antibiotics we used.”

The researchers are now looking for further funding to test the effectiveness of this potion and other ancient remedies that may be effective against modern-day bacterial infections.

Dr. Harrison says further research into alternative treatments for such infections is crucial if we are to tackle the increasing problem of antibiotic resistance.

“There is a pressing need to develop new strategies against pathogens because the cost of developing new antibiotics is high and eventual resistance is likely,” she explains. “This truly cross-disciplinary project explores a new approach to modern health care problems by testing whether medieval remedies contain ingredients which kill bacteria or interfere with their ability to cause infection.”

Medical News Today recently reported on a study published in the Proceedings of the National Academy of Sciences, in which researchers claim an increase in the use of antibiotics in livestock over the next 15 years may fuel drug resistance.